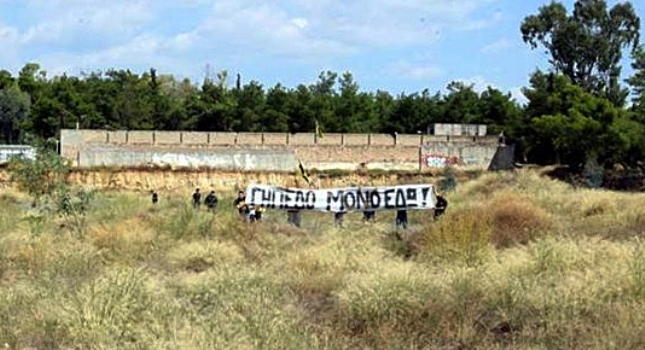 Yesterday’s town council of Nea Filadelfeia municipality in Athens, Greece, was interrupted violently when some 50 AEK FC fans stormed the council hall and attacked members of the municipal government who are against the completion of the project for the construction of the club’s new stadium “Hagia Sofia,” which is planned to be built in the same area as its first home ground, “Nikos Goumas.”

According to eyewitnesses, mayor Aris Vassilopoulos fled in a hurry, while deputy mayor Ioannis Kalampokis did not manage to escape and along with town council president Giorgos Panos, got beaten up by the mob. After the attack, they were both taken to the hospital for medical examination, as did town councilors, Papakostas, Antonaropoulos and the mayor’s associate, Baroutas, who suffered a broken leg.

As Vassilopoulos stated after the attack, the hooligans interrupted the council meeting and vandalized the room, demanding the stadium construction to be discussed, despite not being on the agenda. The mayor informed the fans that there is a scheduled meeting with AEK fans’ representatives on Tuesday to discuss the issue in a calm and civilized environment. In addition, he named town councilor Giorgos Arapoglou as the instigator of the violent incident.