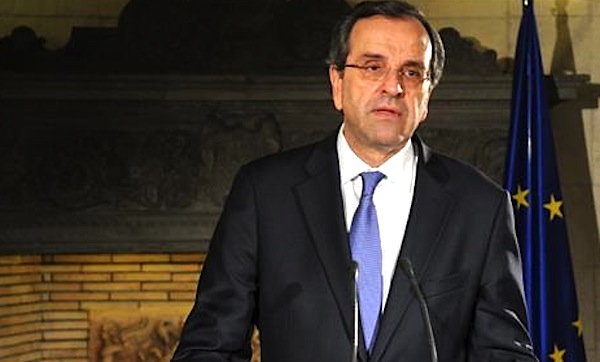 Prime Minister Antonis Samaras addressed the Greek people and described the risks involved if the country is dragged to snap elections. However, he compromised to go to elections at the end of 2015 if parliament elects a new President and bailout negotiations are completed by the present government.
Samaras stressed the importance to elect a President so that Greece will go to the final round of negotiations with the Troika in a climate of political stability. He presented the progress made by the government towards economic recovery and committed to exit the Memorandum through a precautionary credit line and a Constitutional revision. He also said he agrees to general elections towards the end of 2015, after the bailout program has been completed.
Launching an attack towards main opposition SYRIZA President Alexis Tsipras and Independent Greeks (ANEL) leader Panos Kammenos, in relation to the bribery claims by ANEL MP Pavlos Chaikalis, Samaras said “this unfounded series of accusations about the bribing of MPs, that is always proven untrue, cannot continue.”
“Fear and terrorism should not prevail and this is the challenge of democracy,” said Samaras, calling on MPs to “listen to their conscience.”
He went on to suggest that after the Presidential election, the government “can expand with other people who believe in the country’s European prospect.”
The alleged bribery attempt towards Chaikalis and the legal actions that followed have placed a dark cloud over the second Presidential ballot that will take place in Parliament on Tuesday at noon. Coalition and opposition forces fight a war of propaganda, full of mudslinging and unsubstantiated accusations.
Samaras works feverishly to elect Stavros Dimas on the third ballot of December 29. Despite the poor count of the first ballot, there is reserved optimism at the government headquarters and the belief that they will reach the required 180 votes, as they see that some of the MPs who didn’t vote in favor of Dimas on the first ballot, have made statements that they might switch vote on the next.
If Samaras fails to elect a President, then he will be forced to announce the date of snap national elections. Sources close to the Premier say that his chosen date is January 25, 2015, according to Greek newspaper “Ethnos.”