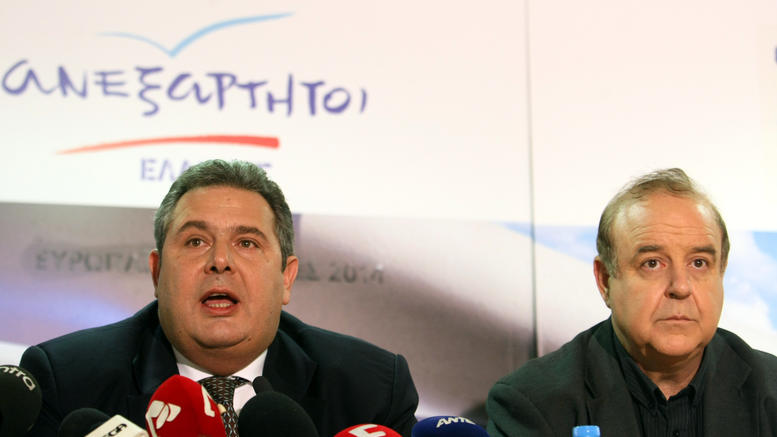 Independent Greeks (ANEL) President Panos Kammenos held a press conference to talk in depth about the alleged attempted bribery of ANEL MP Pavlos Chaikalis.
Kammenos said that Chaikalis had informed him of the incident but the two men decided not to make it public in order to assist the prosecutor’s investigation. He also made public the name of the person who made the alleged bribery attempt, claiming it was Giorgos Apostolopoulos, a Deutsche Bank executive and adviser to the PASOK government. He had been called to testify in the trial regarding the transactions involving credit default swaps (CDS) betting on Greece’s default.
The Independent Greeks chief said that Chaikalis met the intermediary at a hotel wearing a recording device that looked like a watch and later informed the prosecutor. During the meeting, Apostolopoulos offered a large amount of cash and gold to Chaikalis in order to vote for the President of the Hellenic Republic.
A third meeting arranged between the two men was cancelled by the alleged briber, who either suspected or was notified of the setup.
Kammenos said he had met Apostolopoulos in the office of Prime Minister Antonis Samaras.
“The recording and the device are in the hands of the prosecution. Some argue the disclosure of such recording constitutes a felony whereas others say it is a crime until the vote for the presidential election is concluded. I will send two copies of the second meeting’s recording to the Justice Minister and the House Speaker in order for them to inform the parties and choose whether they want to make it public. If the government backs down and conceals (the recording) I will bear the cost to publicize it myself, assuming any risk of criminal liability.”
“The name was given to the authorities and I am surprised to hear that the media say there is no name in the complaint,” Chaikalis said. It should be noted that Apostolopoulos has served as financial advisor to Kammenos as well.
New Democracy circles called the allegations a “silly fabrication.”
SYRIZA leader Alexis Tsipras made the following statement: “Mr. Chaikalis’ complaints are not only serious but they document the widespread feeling of pressure and interventions on several MPs for the election of President of the Republic. We expect that justice will intervene immediately. The country and the political system must get out of the mire.”