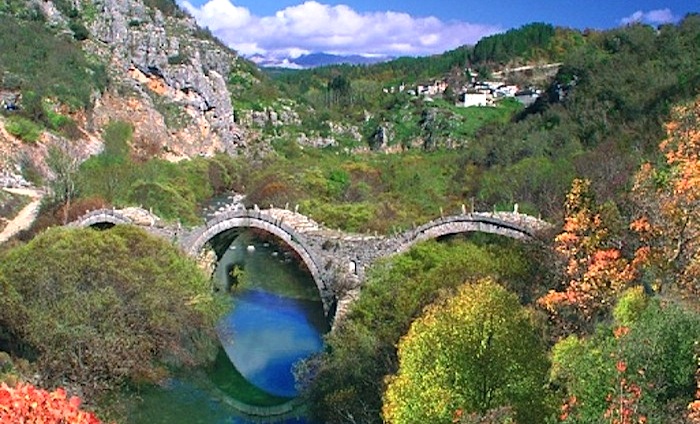 The Greek culture ministry announced that it intends to officially sponsor the traditional villages of Epirus’ Zagori district in northwestern Greece as a Greek ‘cultural landscape’ to be added to the UNESCO World Heritage list. The ‘Zagorochoria — North Pindos National Park’ area have been on the UNESCO Tentative List for the last two years, which is one of the conditions for inclusion in the list of World Heritage Sites.
“It is with great joy that the culture and sports ministry announces its decision to finalize its proposal for the inclusion of Zagori in the UNESCO World Heritage Monuments List,” said Culture and Sports Minister Costas Tassoulas at a conference held at the culture ministry on Thursday, attended by ministry general secretary Lina Mendoni and Zagori Mayor Vassilis Spyrou.
The traditional stone built villages of the remote and mountainous Zagori area are among the best preserved traditional settlements in Greece and situated in an area of exceptional natural beauty, including features such as the Vikos Gorge and Voidomatis River.
In order for a cultural landscape to be included in the UNESCO World Heritage list, it must have proven exceptional global value and its authenticity and integrity must be protected. There must be a comparative study comparing the site with others, both included and not included in the UNESCO list, a definitive boundary and protection zone, a written management plan and guarantees for its effective implementation. It also calls for a record of factors likely to affect the cultural good, either positively or negatively, and measures to protect the monument in emergency situations.
(source: ana-mpa)