Behind the Scenes of the Greek Presidential Election 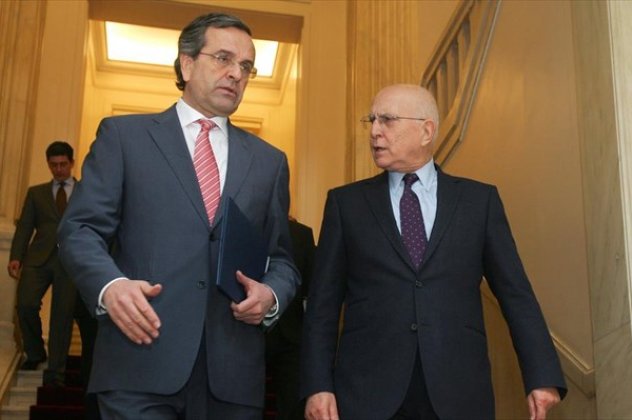 A total of 160 positive and 135 negative votes managed to attract the nomination of Stavros Dimas in the first open vote for the Presidency of the Hellenic Republic held at 7:30 pm in the Greek Parliament. According to article 32 of the Greek Constitution, during the first and second ballots of the Presidential Election, a total of 200 votes are needed in order to successfully elect a new President.

Amongst those who voted negative, apart from the opposition parties’ parliamentary groups (SYRIZA, ANEL, KKE, DIMAR and Golden Dawn) were independent MPs Byron Polidoras, Vassilis Kapernaros, Petros Tatsopoulos, Mimis Androulakis, Niki Founta, Vassilis Oikonomou, Chrysoula Giatagana, Panagiotis Melas, Rachel Makri, Theodoros Parastratidis, Markos Bolaris, Theodora Tzakri and Giannis Kourakos, some of whom were expected to vote in favor of Dimas. Emerging from the Parliament after the procedure’s completion, Melas underlined that on the remaining two ballots, he might change his vote and vote “Yes.”

Absent on the first ballot was ANEL’s Kostas Giovanopoulos, whose absence is considered meaningful, as it might leave the possibility open to vote in favor of Dimas in the following ballots. Also absent were the two former Golden Dawn MPs, Stathis Boukouras and Chrysovalantis Alexopoulos, who were expected to vote “Yes,” independent MP Giorgos Kasapidis, who earlier today lost his father and was also expected to vote in favor of the new President, and SYRIZA MP Anna Chatzisofia.

Greek Parliament President Evangelos Meimarakis has announced that the second round of voting will be held next Tuesday, December 23, requiring again a two-thirds majority or 200 votes. If this is not reached, a third round on December 29 will require 180 votes. According to the Greek Constitution, following a possible failure to elect a new President in the third round, the country goes to general elections.

“Tonight was the first of three ballots. Two more ballots are ahead of us and I hope that the President will be elected. I want to congratulate the independent MPs who voted in favor of Stavros Dimas,” Prime Minister Samaras stated while emerging from the Parliament, without answering further reporters’ questions.

On his behalf, main opposition SYRIZA leader Alexis Tsipras underlined that “the scaremongering of the recent days fell into the gap, the strategy of fear collapsed, tomorrow will be a new day.” Referring to the possibility of snap elections, Tsipras added that “the answer will be given by the people and Democracy.”

While exiting the parliament, Independent Greeks (ANEL) leader Panos Kammenos also highlighted that “the operation to terrify MPs failed. We will proceed with the democratic procedures to replace the government.»

“On the occasion of the election of the President of the Hellenic Republic, a new two-party fight is being set. An new political polarization, known from the past, is being set. New Democracy and SYRIZA accuse each other for the country’s destabilization. In fact, both are sitting the exams of the European Union, the markets and capitalism. They want the people in the corner, they want the people unarmed, watching the developments and accepting long-lasting Memorandums and agreements of strict supervision imposed by its lenders without judging, accepting the shackles of the European Union and the chains of Eurozone,” Greek Communist Party (KKE) secretary general Dimitris Koutsoubas commented.

It should be noted that the first ballot for the election of the new President of the Hellenic Republic was covered live by numerous foreign media. In addition, increased were the security measures during the procedure, while the nine imprisoned MPs of extreme right Golden Dawn (including the now independent former Golden Dawn MP Boukouras) were granted a permit to get to the Parliament and participate in the ballot.