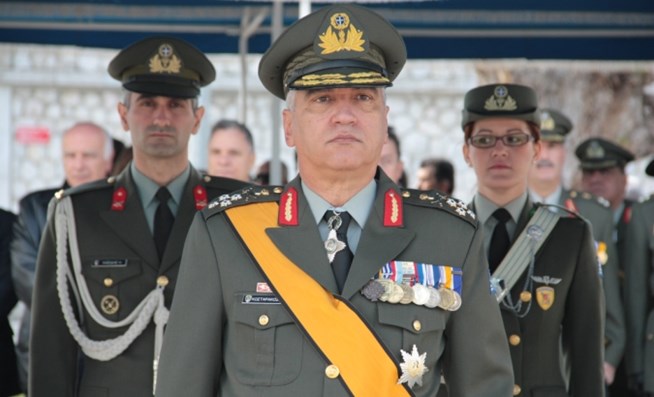 The Chief of the Hellenic National Defense General Staff (HNDGS) since November 2011, General Mikhail Kostarakos, was officially named today as the next EU Military Committee (EUMC) chairman and he will assume his duties on November 6, 2015.

During his three-year term until 2018, Kostarakos will be the military adviser to the EU High Representative for Foreign Affairs and Security Policy and the primary point of contact for the Commanders of EU’s military operations and missions. He will succeed French General Patrick de Rousiers, who has been in the position since November 6, 2012.

The Greek General was elected for a three-year term at the highest European Union Military Committee on November 13 and was appointed to his new position by the Chiefs of the Member States of the European Union Armed Forces in a vote held in Brussels, as part of EUMC’s Conference.

Kostarakos was born in Thessaloniki, Greece, in 1956 but originates from Mani, Peloponnese, and after he graduated from the Experimental School of the University of Thessaloniki he was admitted to Evelpidon Military Academy, from which he was commissioned as a second lieutenant in the Artillery, four years later, in 1978. He holds a Political Science degree from the Law Faculty of the University of Athens and an MsC in “Diplomatic and Strategic Studies.” He was promoted to General in 2011.

EUMC is the highest military body set up within the Council. It directs all EU military activities and provides the Political and Security Committee (PSC) with advice and recommendations on military matters. EUMC is composed of the Member States’ Chiefs of Defense (CHOD), who are regularly represented by their permanent Military Representatives (MilReps). EUMC has a permanent Chairman, selected by CHOD and appointed by the Council.