GRNews
GreekReporter.comGreeceFive Greeks play in the Same Campionato Match for the First Time... 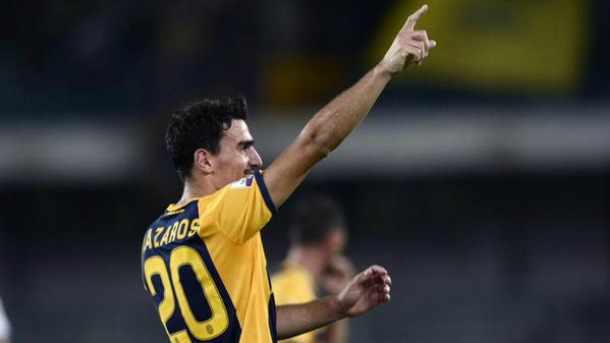 Lazaros Christodoulopoulos, Panagiotis Tachtsidis, Vaggelis Moras, Orestis Karnezis and Panagiotis Kone were the five Greek international players that were part of today’s historical game between Udineze and Hellas Verona for matchday fifteen of the Serie A.
Never in the history of any club sport outside of Greece have five Greeks participated in the same match while being on the field at the same time. Udineze started the game with just Orestis Karnezis as their goalie but as soon as Panagiotis Kone was subbed in (78′) we witnessed an event that can only bring pride and hope to all the rest of the footballers in Greece who dream of an international career.
As far as the game went, Lazaros Christodoulopoulos turned out to be the MVP as he assisted Lucas Toni on his first goal but also scored the winning one that brought the three points of victory to the team of Verona.
http://www.dailymotion.com/video/x2cjxh8_udinese-verona-1-2-full-highlights-14-12-2014-serie-a-15a-giornata_sport
Simultaneously, a few miles southwest of Udine, at the city of Genoa, the local team was housing AC Roma. Another match which was of Hellenic interest, as four Greeks were participating but not all got time on the field. For Genoa, Giannis Fetfatzidis saw the game on the bench, similarly to Vasilios Torosidis and Kostas Manolas of AC Roma. The only one who actually got any playing time was Jose Holebas, whom recently has raised his value with his extraordinary performances.
http://www.dailymotion.com/video/x2cjvtm_genoa-roma-0-1-full-highlights-14-12-2014-serie-a-15a-giornata_sport