GRNews
GreekReporter.comGreek NewsEconomyGreece Spends More on Pensions Than Most Countries

Greece Spends More on Pensions Than Most Countries 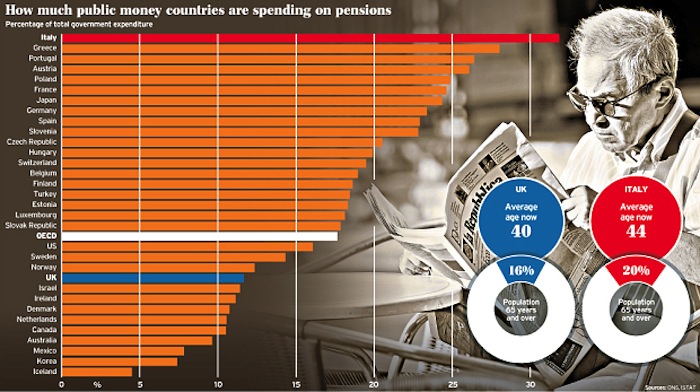 Greece comes second on pension spending, according to an Organization for Economic Co-operation and Development (OECD) report. Greek pensioners, however, may have to wait up to three years until they get the first full pension check.
The countries spending the highest proportion of their public money on pensions are Italy (31.9%), Greece (28%) and Portugal (26.4%). This is a result of these nations’ ageing population and the economic downfall they have suffered since the economic crisis, which has caused other state spending to decrease.
The country that spends the least on pensions is Iceland. In 2011, only 4.5% of Iceland’s public spending went to pensioners.

Greek pensioners may have to wait up to three years in order to receive the first full pension check and some have to wait months to get the temporary pension.
There are tens of thousands of pensioners “waiting in line” at the Social Security Fund (IKA) and the Unified Supplementary Insurance Fund (ETEA). At the moment, there are 163,000 cases pending for almost 90,000 pensioners. According to IKA data, there will be 50,000 more pensioners added on the “waiting list” in 2015.
IKA temporary pensions take two to three months to process, even though legislation states that pensioners should get 80% of their pension within 45 days, if they only have one insurance fund, and up to 75 days if they have more than one. Engineers, doctors, lawyers and other professions that have their own insurance funds, receive temporary pension in three to four months.
The Self-Employed Insurance Organization (OAEE) has a two-year wait before the insured get the full pension. If they have supplementary insurance, the delay may be up to three years.