GRNews
GreekReporter.comGreeceSyrian Refugees of Syntagma Square to be Housed by Athens Municipality

Syrian Refugees of Syntagma Square to be Housed by Athens Municipality 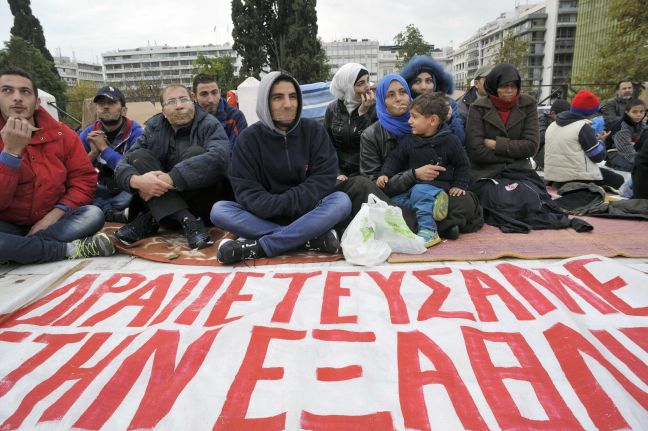 Fruitful was finally the meeting held earlier today between the Greek Interior Ministry’s Secretary General, Angelos Syrigos, Athens Mayor Giorgos Kaminis and the representatives of the Syrian refugees who have been in a sitting protest for more than 20 days in Syntagma square, across the Parliament in downtown Athens, Greece.

The Syrian refugees submitted a list to Syrigos, containing 603 names of asylum seekers, and 50 refugees left the square in order to be housed at municipal social structures, while the remaining ones will also be settled over the weekend.

It should be noted that a number of them went on a hunger strike on Monday, November 24. The protesters have taped their mouths shut and demanded asylum as well as medical assistance. Last week, Syrigos expressed the Greek government’s will to find a solution to their problem. Speaking at a press conference, Syrigos explained that granting them a political asylum is the only legal and possible solution. He said that this is a possibility that will provide them the right to travel to other European Union countries, but not permanently reside and work there. Talking to Greek newspaper “Kathimerini,” Syrigos revealed that the Greek government is also willing to ask from northern European countries to grant asylum to the 200 Syrian refugees, although he underlined that it does not expect to get a positive response in this request.

During the long-standing protest, two of the Syrian refugees lost their lives. According to their compatriots, one died in his attempt to cross the Greek-Albanian border in order to continue his journey to Europe, and the second died while being hospitalized, after suffering a heart attack.