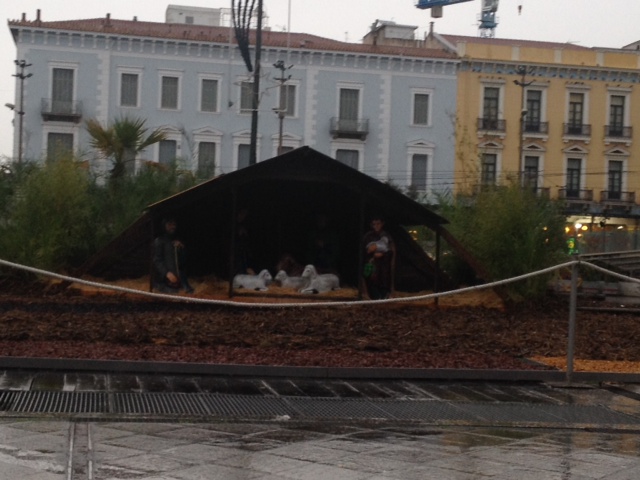 A poor, plastic, unimaginative Christmas manger placed in Omonoia Square in Athens reflects the sad mood of austerity-stricken citizens and a city ravaged by neglect and continuous, destructive riots.
The plastic figures of Christ, Mary, Joseph and the wise men and angels, the cheaply made camels and sheep, the fake palm trees, the earth and sawdust on the ground, create a picture of a nativity scene put together haphazardly and in haste. A decorative installation that has nothing to do with a city that has a rich history of centuries and countless well-known and hidden charms.
This year’s nativity scene looks very much like the one set in 2011, when the municipality of Athens received many negative comments in the social media. Some of the figures used may have been taken from that set.
After complaints over the poor Christmas decorations of 2011, the City planted dozens of poinsettias to brighten the area. Maybe they will do the same this year and that explains the screens and the empty plots of earth. Perhaps, after the poinsettias are planted, their rich colors will take away the drabness.
Still, a look at this year’s social media shows that most people believe that Athens deserves better Christmas decorations than that. Most point out and reminisce of the effective and beautiful bright stars and the word “Athens” in neon letters that decorated the square last year. Despite the economic crisis, the civil unrest and the general uncertainty, a look at the Parthenon can restore anyone’s optimism and holiday mood.