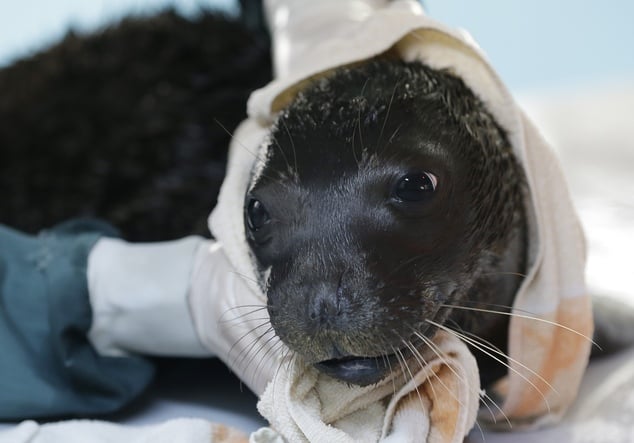 An orphan baby seal from an endangered species was rescued 25 days ago by a Greek animal rescue organization, MOm. According to organization representatives, the seal is expected to make a full recovery after its treatment at a zoo in Spata, near Athens, Greece.
Andriana, the one-month old female monk seal was found on the island of Skopelos in the Aegean Sea by local residents in November. Her condition was critical since she had been separated for her mother for nearly a week. The pup was quickly transferred to the Attica Zoological Park by MOm.
The orphan monk seal is currently in an intensive treatment program at MOm’s Mediterranean monk seal First Aid Unit and, according to rescue coordinator Marianna Psaradellis, she is responding well to medication, while she has also gained weight.
If her health remains stable, then she will be released at a protected marine park on the Greek island of Allonissos in March 2015.
MOm, The Hellenic Society for the Study and Protection of the Monk Seal, is a Greek non–governmental environmental organization with the legal status of a Non–profit association. MOm is active in the protection and promotion of the coastal and marine environment of Greece, through the protection of the Mediterranean monk seal, which is the only seal species in the Mediterranean Sea and the most endangered seal on earth.