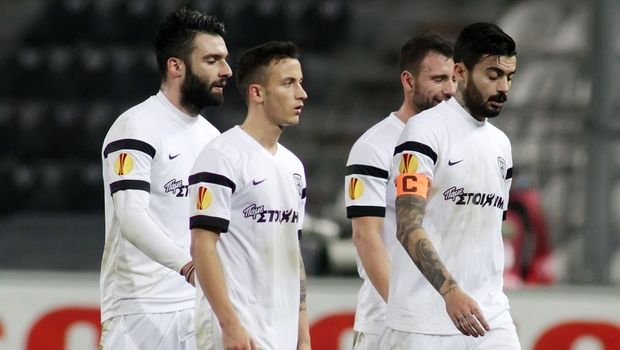 PAOK unexpectedly lost 1-2 in Thessaloniki to Ligue 1’s Guingamp and subsequently was disqualified from UEFA Europa League‘s knockout stage. Stefanos Anastasiadis was the lone scorer of the black and whites who finish third in Group K behind the french club and Fiorentina who took top spot.
Aggelos Anastasiadis started the game with Glykos, Skondras, Vitor, Tzavellas, Rats, Golasa, Katse, Tzandaris, Pereyra, Salpingidis and Athanasiadis on the field, a line-up he’s used in most recent matches and has found it to be effective. After all, the team from Thessaloniki is currently sitting comfortably in first place in the Greek league, five points ahead of second Olympiacos.
As mentioned, coming from a great run of results (despite last Sunday’s against Skoda Ksanthi), it was a given that PAOK would easily walk past the task of the French League’s 16th team. They reckoned without the guest though and specifically a brilliant Claudio Beauvue, who scored all of the French team’s goals and undoubtedly was named man of the match. The young lad scored in the 7th minute to poison the Toumpa stadium and again, seconds before the end of the game, he dribbled past three defenders to execute Panagiotis Glykos for the win and the ticket to the next round. Stefanos Athanasiadis was a loner for PAOK, who presented a woeful performance in one of the most important matches of the season. The Greek international scored from the penalty spot to equalize (22′) and then missed PAOK’s closest chance to lead the score, after his header (52′) was stopped by the woodwork.
As expected, PAOK’s disqualification riled up the fans who shouted from owner Ivan Savvidis to remove the crabs from his pocket and start spending money to welcome some world-class players. Head-Coach Aggelos Anastasiadis in his post-game interview, swore that coming next year, members of the current team will no longer be part of roster. He avoided using names, but after last night’s clash, it was obvious that substitutions Maarten Martens and Hedwiges Maduro will be searching for new teams in 2015.
PAOK will now focus in what’s said to be one of the most exciting championship races in years, as just before Christmas break he finally seems mature enough to win his first Greek league trophy in 30 years.