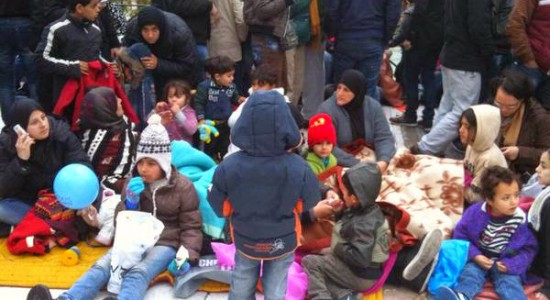 Syrian refugees who have camped at Syntagma Square across the Parliament in downtown Athens, Greece , since November 20 demanding EU travel documents, have begun applying for political asylum, Secretary General of Population and Social Cohesion Angelos Syrigos said on Wednesday.
The Syrians are demanding travel documents to go to other European countries of their choice and apply for political asylum there. The issue came to a standstill after the government responded that the only thing it could do would be to grant them political refugee status, which would allow them to travel but not work in other EU countries.
As of Wednesday, 40 have applied for political asylum and the number of applicants is expected to rise, Syrigos said, as he is expecting a list of 646 names to check against. According to unofficial counts, the Syrian refugees in Athens total 4,000.
The simplified application process for political refugee status requires a passport, identification card or international driver’s licence. Paperwork will take longer to process than the simplified procedure’s two weeks for those without the required identification.
The Greek Interior Ministry has committed to housing, food and medical services for those who apply for political asylum.