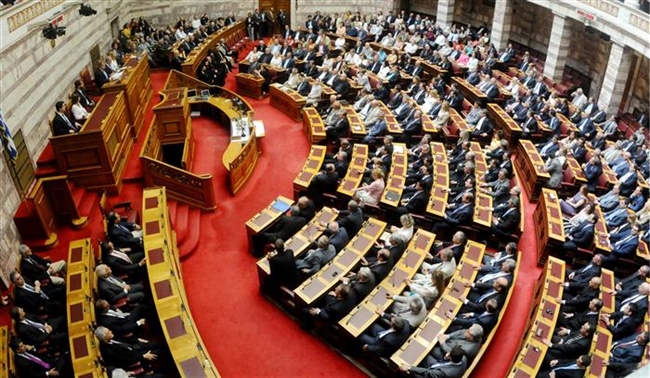 Varied were the responses of the Greek opposition parties, following the announcement of the Presidential ballot dates as well as the Stavros Dimas candidacy proposed by the coalition government partners, Prime Minister and New Democracy leader Antonis Samaras, and government Vice President and PASOK leader Evangelos Venizelos.

In an announcement published yesterday night, main opposition SYIRZA underlined that as emerged from the 2015 budget vote results (passed with 155 votes), there can not be “clear government majority corresponding to the minimum number of 180 MPs required by the Constitution for the election of a new President of the Hellenic Republic. The decision – in consultation with the Troika – to expedite the Presidential election, is a desperate attempt to hide the new measures, while it blackmails the MPs’ vote. It will not succeed.”

Furthermore, the main opposition party declared that the acceleration of the Presidential election was long-expected and it is welcomed, “as it brings closer the only redemption prospect for the people and the country, which is to resort to general elections.”

On its behalf, the Greek Communist Party (KKE) underlined that “the acceleration of the election of a new President of the Hellenic Republic is included in the planning for escalation of aggression against the people, with new barbaric measures that are promoted, regardless of any extension of the Memorandum and the transition to a new monitoring phase,” adding that the developments “require direct popular intervention, without any delay in the name of waiting for the negotiation, the Parliament votes and the possible elections.”

The Independent Greeks (ANEL), with a statement by its spokesperson, Terence Quick, repeated that the party has already expressed with “openness and honesty” that a page break is required for Greece and the country should head to elections immediately. “We start a national war for our country and our dignity, defending our homes and our children,” he concluded.

Former government partner Democratic Left (DIMAR), underlined that the party, by decision of its recent convention, “has spoken out against the election of a new President of the Hellenic Republic by the current Parliament on the ground that it is not willing to help the extension of political deadlocks, such as those followed by the current government. Political developments and the election issue will be discussed at a joint meeting of the Executive Committee and the Parliamentary Group of DIMAR to be held tomorrow afternoon.”

Finally, “To Potami” highlighted that it has already suggested to the other parties to “agree and choose for President a citizen who will express the dynamics hidden inside the Greek society and not a former politician,” while attacking the coalition government partners for moving in the sense of “recalling reserves,” while SYRIZA refuses to tell the Greeks who should be the next President of the Hellenic Republic “since it only seems to care about the ministerial chairs.”