Greek Budget for 2015 Voted Amidst Protests 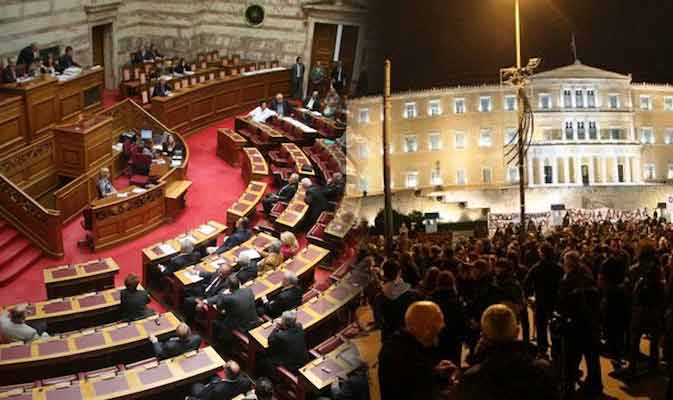 The 2015 budget was voted in Greek Parliament (by a vote of 155 in favor, 134 against, 1 present) at midnight amidst anti-austerity protests and scenarios that the government plans to bring the Presidential election forward in early January, to put an end to speculation regarding early general elections.
The budget, which has not been approved by the country’s international lenders, envisages an economic growth of 2.9% and an unemployment rate reduction of 22.6% next year, down from the current 24.8%.
Inside the parliament, tensions were high as the two-party coalition government of conservative Prime Minister Antonis Samaras and opposition parties were arguing about the forecasts and the next round of policies needed to meet all fiscal discipline and reform targets set to overcome the five-year debt crisis.
Earlier, demonstration rallies from unions and independent groups protested outside the parliament. The General Confederation of Greek Workers (GSEE), the Greek Communist Party workers union PAME and a group of anarchists in support of hunger striker Nikos Romanos gathered in Amalias avenue in front of the House.
“Five years into the crisis, we are faced with another budget that will further impoverish ordinary Greeks,” said GSEE head Yiannis Panagopoulos. “Everything about it is wrong.”
A meeting of European Finance Ministers in Brussels on Monday had been set as the cut-off date for the €1.8bln aid disbursement to be made. Discussions over a potential credit line – to be given to the country once the EU/IMF bailout funds stop – were also due to begin. The uncertainty has spooked investors and, once again, sent yields on Greek bonds soaring.