GRNews
GreekReporter.comGreeceGreek Police on Alert Ahead of 'Hot Weekend' in Athens

Greek Police on Alert Ahead of 'Hot Weekend' in Athens 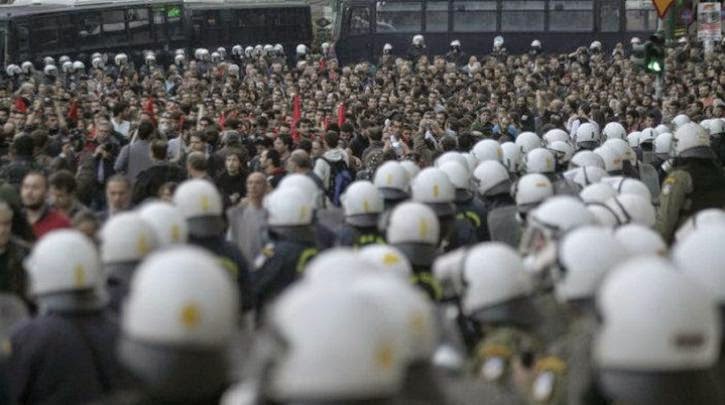 Almost the entire Greek Police force of the Attica region will be on alert on Saturday due to the sixth anniversary of Alexandros Grigoropoulos‘ assassination, the visit of Turkish Prime Minister Ahmet Davutoglu and the planned parliamentary vote on the 2015 state budget.
Tomorrow afternoon, when the demonstrations commemorating Grigoropoulos will begin, some 8,000 policemen will be in downtown Athens to prevent clashes, while in view of the “hot weekend,” Public Order Minister Vasilis Kikilias invited all sides to remain patient and calm.
With Athens turned into a fortress due to heavy police presence, Kikilias called from the Parliament today political parties, social organizations and individuals “regardless of different political positions and views” to understand the moments’ seriousness. Democracy, he said, “does not allow anyone to conspire against social peace, stability, the right to private and public property; it does not permit tolerance toward any who attempts to tarnish it.”
Since Friday noon and the arrival of the Turkish Prime Minister in the Greek capital, police has utilized all its power and means. On Saturday, December 6, marking the sixth anniversary of Grigoropoulos’ assassination in the downtown Athens district of Exarcheia by a police officer, various events and demonstrations have been scheduled. The police headquarters worry that demonstrations, which are expected to be more than previous years, will also rally in solidarity with Nikos Romanos, who is on the 26th day of hunger strike and is an element that might cause tension and probably unrest due to the critical state of his health and the government’s refusal to grant him a student leave from prison.
In addition, the 2015 budget is expected to be voted in Parliament on Sunday and the country’s trade union organizations have announced a protest rally against the demands made by the Troika of Greece’s lenders. The rally, organized by the General Confederation of Greek Workers (GSEE) in Syntagma Square, is scheduled to begin at 5:00 pm.
The combination of the three events produces yet another explosive mixture for the Greek capital, which has seen numerous violent demonstrations since December 2008 and Grigoropoulos’ assassination.