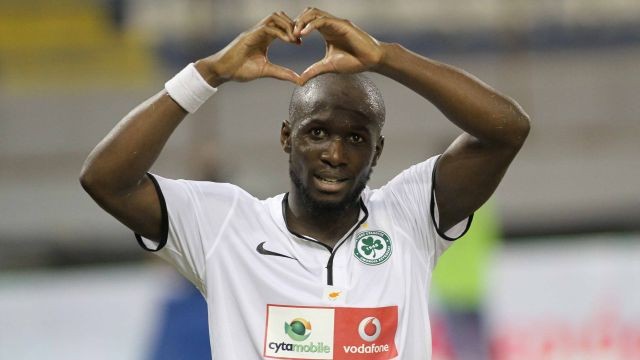 By racist behavior from a portion of APOEL Nicosia fans was stigmatized the recent football derby between their team and fierce rivals Omonoia last Sunday in Cyprus. The biggest football match in Cyprus ended with an 1-0 narrow win for home team APOEL, although the complaints of 30-year-old Beninese international footballer Michael Pote regarding the racist provocations he was subjected to by the opposite team’s fans, left the developments in the pitch in the shadow.

As Pote said, the APOEL fans pretended to be monkeys when he was approaching the stands, while when he returned the gesture to the fans, the referee booked him, when after several minutes of racist insults targeting him, he mimicked them and then kissed his arm, in a symbolic move to prove the he has no problem with his skin color.

“This is not football. My kids saw the incident on TV and asked me what happened. I told them that these are racist people. But its OK. I will focus on playing football,” he told reporters after the match’s final whistle was blown. His team, Omonoia, has filed an official complaint to the Cyprus Football Association (FCA).

Furthermore, according to the team’s spokesperson, Andreas Demetriou, the match’s referee, Demetris Masias, did not register the incidents in his report, as he was obligated to do, while as the club’s official revealed, Omonoia’s board is now waiting to see if the referee’s judicator reported the provocations in his separate report.

This is not the first time that racist behavior was witnessed in Cypriot football, while violent incidents between opposing fans and the police are also usual. The various measures adopted by the state to tackle such incidents are thought to have failed.

A recent poll placed Omonoia as the island’s most popular team with 28.6% and their fans are known for their left-leaning, socialist character. On the opposite, APOEL fans are right-wing in their majority but there are no strong ties between its ultras and any political party.