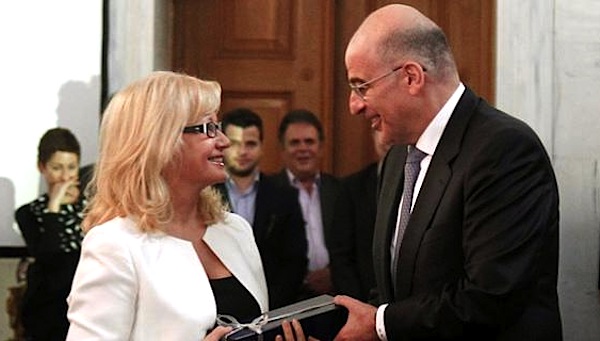 The “Athanassios Botsis” Foundation for the Promotion of Journalism presented its prestigious annual awards to 17 Greek journalists yesterday at the Old Parliament House in downtown Athens, Greece . The ceremony was attended amongst others by the President of the Hellenic Republic, Karolos Papoulias, Hellenic Parliament Vice President Ioannis Tragakis, government spokeswoman Sophia Voultepsi, National Defense Minister Nikos Dendias, former Hellenic Parliament President Nikitas Kaklamanis and former Education Minister Marietta Giannakou.
During the 31st awards ceremony, Papoulias was awarded an “Exceptional Award” for his contribution to the country’s political life and his service as head of the state. On his behalf, Botsis Foundation chairman Panos Karagiannis underlined that 2014 marks 100 years since the establishment of the Journalists’ Union of Athens Daily Newspapers (ESIEA), whose members have fought hard to keep it alive, as well as improve the quality of journalism.
The Foundation’s four main awards were given by Papoulias to Katerina Antonopoulou, Dimitris Michalelis, Mina Karamitrou and Lazaros Chatzinakos. Special awards were given to Lambros Stavropoulos, Olga Panagiotidou, Evi Papadosifaki, Haris Savvides, Nadine Charvalia and Ilias Asimakopoulos.
Honorary award was handed by Dendias to Angeliki Nikolouli (pictured above) in recognition of her 30 years of active journalism and great social contribution through her 19-year TV program “Light in the Tunnel” (Fos sto Tunnel) for which she has already received 23 awards and is included in the Guinness Book of Records. Nikolouli is the first female investigative crime reporter in Greece.
Honorary awards were also given to John Bardosas, Petros Makris, Gerasimos Dossas, Spyros Capralos, Konstantinos Margaritis and Galatea (Gelly) Vourvouli.