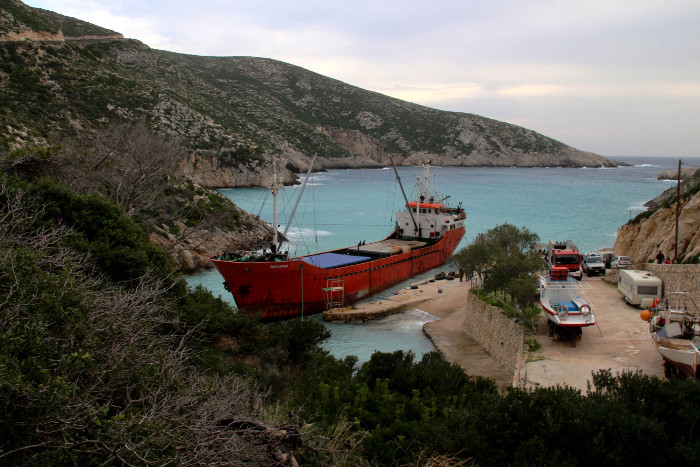 Port authorities are investigating the case of a cargo ship that was found abandoned on the steep west coast of Zakynthos, Greece, on Monday, December 1. The 57-meter ship, named “AMARANTHUS” originated from Palau Islands.
Port authority officers patrolling the area of Porto Vromi spotted the abandoned ship and after a quick search, they found no crew members on board. However, they found hundreds of cigarette boxes in the ship’s holds. According to official documents that authorities found onboard, “AMARANTHUS” was the second name of Moldovan ship “ISIK 2.” After further investigation, they found that the original name had been hastily erased.
Authorities also came across the crew members documents, all of whom originated from Ukraine, and alerted the Greek Police.
Port authority officers tended to the ship so that it would not sink. They tied it safely and then sealed the hole that had been caused to the holds due to the ship crashing on rocks. Bad weather prevented them from towing the ship to the island’s main port.
This is the second time such a case has occurred in Zakynthos. In 1982, the ship “PANAYIOTIS,” which belonged to a Cephalonian named Charalambos Kombothekras, was found ashore. Its main engine had malfunctioned and bad weather conditions caused it to go off course. The ship was filled with illegal cigarettes that were being transferred from Yugoslavia and Albania to Italy.