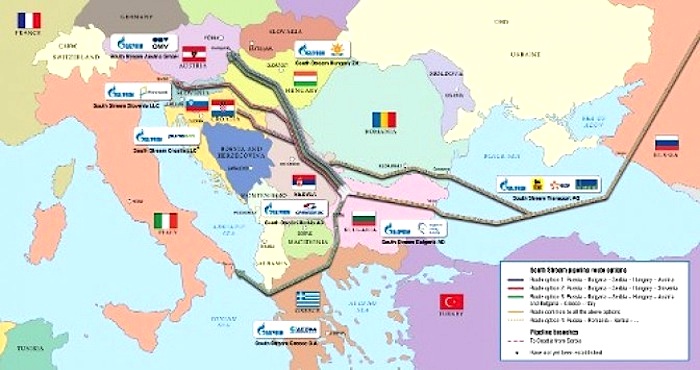 Russia will supply natural gas to Turkey through the Blue Stream pipeline and increase deliveries by 3 billion cubic meters a year at a discount, after a deal signed between Russian President Vladimir Putin and Turkish President Recep Tayyip Erdogan, according to a Bloomberg report.
Russia has scrapped the South Stream pipeline project. The pipeline was to go under the Black Sea and then through Bulgaria, Serbia, Hungary, Italy and Austria. Instead, Russia will now concentrate on the Blue Stream pipeline supplying gas to Turkey through a different Black Sea pipeline and may build an additional gas hub for the South European consumers on Turkish territory, near the border with Greece, if needed, Putin said. “If the European Union doesn’t want our gas…  We will redirect the flow of our energy resources to other regions of the world,” he said.
Analysts say that this is a strategic move that will strengthen political ties along with trade relations between Moscow and Ankara after Russia’s clash with the European Union over the Ukraine issue. Plunging oil prices and sanctions imposed by the European Union have hurt Russian economy, sending the Russian ruble on a downward rally and forcing Putin to seek new deals to help the Russian economy.
Now Russia will have to present alternatives for companies that signed contracts for the South Stream pipeline. “In lieu of South Stream, Gazprom and Turkish pipeline company Boru Hatlari Ile Petrol Tasima AS plan to build a pipeline capable of shipping 63 billion cubic meters a year from Russia to Turkey. The infrastructure built in preparation for South Stream will be used for this pipe,” a Gazprom spokesman said to Bloomberg. About 14 billion cubic meters, 20 percent of total output, will go to Turkey. The rest will be shipped through Turkey’s pipeline network to the Balkans, he added.