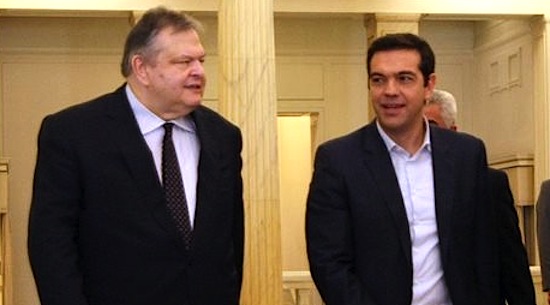 With main opposition SYRIZA leader Alexis Tsipras met earlier today Greek government Vice President and Foreign Minister Evangelos Venizelos in his office at the Foreign Ministry in order to brief him on foreign policy. As declared by SYRIZA representatives, the meeting was “strictly confined to matters concerning foreign policy,” refusing the discussion of issues concerning the country’s internal politic developments.

Emerging from the 45-minute long meeting, Tsipras underlined that foreign policy needs national strategic planning, calmness and clarity. “Only in this way will we be able to overcome challenges in a productive manner and have positive results,” he said, while commenting on the lately tensioned Greco-Turkish relations as well as the unsolved Cyprus problem, the opposition leader characterized the violation of Cyprus’ sovereignty – by the presence of seismic vessel “Barbaros” in Cyprus’ Exclusive Economic Zone (EEZ) escorted by a Turkish Navy battleship in order to conduct hydrocarbons research without permission – as a very negative development. “It should be made clear to Turkey that this development is a major provocation and the Turkish survey vessel should leave the Cyprus EEZ so that the process of dialogue on a solution to the Cyprus problem can resume,” Tsipras said.

Furthermore he described that he was briefed on the matter’s delicate handling, which cannot be publicly announced, while at the same time he also submitted his own observations: “At this hour, all available means should be used by the international community to pressure the Turkish side and bring about a deescalation. To stop this provocative behavior and resume the talks for a solution to the Cyprus problem.” Futhermore, Tsipras criticized not the essence of the dialogue tool, which he declared he is in favor of, but the timing of the upcoming 3rd Greek-Turkish High Level Cooperation Council “considering the violation of international law committed by the Turkish side,” as he explained.

On his behalf, the Foreign Minister said that the meeting was very substantial and interesting, conducted in an atmosphere of national understanding. “On these issues, there has to be a solid domestic front, because we are going through a period of multiple crises, and Greece must always be a point of stability. We have the list of pending national issues. We must ensure deescalation of tension and defense of national interests. To achieve this, through ongoing negotiations, all Greeks need to have a shared perception of these issues, and I believe that my meeting with Mr. Tsipras helped in that direction,” Venizelos explained.

Answering questions on whether domestic political issues were also tabled, he said that foreign policy should hold a prominent position in public opinion. “We are very well aware of the anxiety felt by every household and business in regards to the economy, but without national security and a foreign policy that keeps the country secure and stable, we do not achieve our goal,” he concluded.