GRNews
GreekReporter.comSportsBasketballEuroleague Basketball: Olympiacos and Panathinaikos Qualify to the Final 16

Euroleague Basketball: Olympiacos and Panathinaikos Qualify to the Final 16 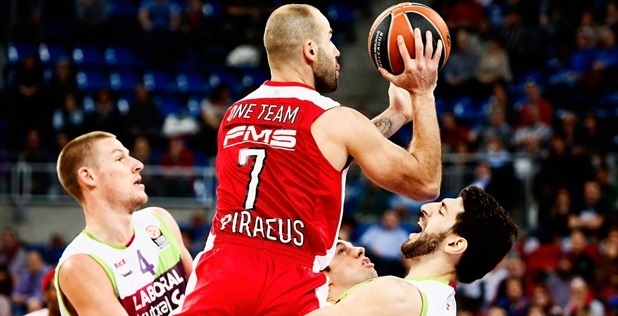 Both Greek representatives have successfully managed to qualify to the top-16 of Europe’s most prestigious basketball tournament. Last week it was Olympiacos, yesterday it was Panathinaikos’ turn.
Panathinaikos – Bayern Munich 87-72
Having five players with double figures and an almost full-house OAKA stadium, Panathinaikos made their win against the German champions look like a piece of cake. Mavrokefalidis with 16 and AJ Slaughter with 17 ran the offense, while Fotsis, Diamantidis and Giankovic put on an excellent defensive display, keeping Bayern to just 72 points.
With this win, Panathinaikos accomplished his initial goal to make it through the next round and now hopes to reach the final four. CSSKA Moscow, Real Madrid and Barcelona are levels above this season, but in respect of their glorious past, the greens can always aim for the end of the road.


Laboral Kutxa – Olympiacos 89-70
Failing to care about the game’s outcome, Olympiacos surrendered to the Spanish side’s appetite to grab the win, which kept the winners in the hunt for a spot in the top-16. Vasilios Spanoulis survived the Waterloo by scoring 27 points in just 29 minutes, while at the same time reaching and surpassing the 2.500 point mark, placing him no4 in the all-time scoring leaderboard of the Euroleague.
While the Piraeus club’s shooting percentage beyond the arc was plainly awful (3/19) and total assists were just 5, Laboral put together their season’s most complete performance, leaving nothing for their opponents to fight for. The final score was just and Olympiacos picked up his first loss in two years in the Euroleague’s group stages.
https://www.youtube.com/watch?v=wUi4q1ALb84