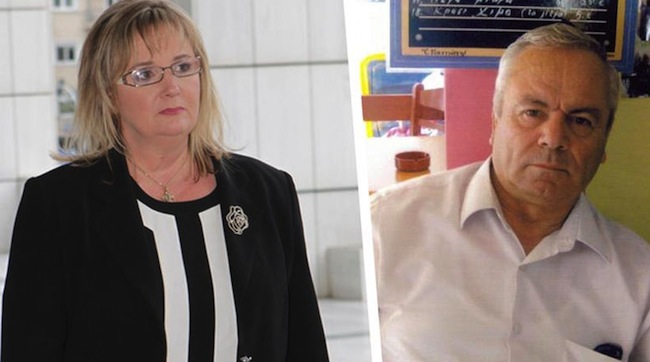 Court of Appeals Prosecutor Panagiotis Panagiotopoulos on Thursday requested the waving of telephone communication privacy and asked for the assistance of the Electronic Crime Squad in searching for evidence in social media accounts related to the reopened case of a Greek MP’s bribery allegations.
The prosecutor made the requests in response to new allegations by opposition Independent Greeks (ANEL) MP Stavroula Xoulidou, who was allegedly offered 3 million euros by Giorgos Soukourιs to vote in favor of a new President of the Hellenic Republic from the present parliament.
Xoulidou’s long testimony before the prosecutor was completed on Thursday. The MP referred in detail to what she has already maintained in public regarding the alleged bribery attempts. She also appeared certain that she is not the only recipient of a bribery proposal. Testifying on the history of contacts initiated with her by Giorgos Soukourιs, she said that the first attempt was made last March, and communication became more frequent since June, while the first insinuation about money was made between late August and early September.
The MP has allegedly presented detailed evidence and copies of facebook messages she exchanged with the individual in question. She also referred in detail to two of the messages, one that said “you only have one chance in life,” urging her to accept the money, and a second message she received on November 20 saying “1-0. Melas took it. Do you remember what I’ve told you?”
The MP allegedly told the prosecutor that Soukourιs said to her over the phone, “they are waiting for you with open arms,” naming two individuals and urging her to set a meeting. Xoulidou said that two meetings were set at her office in order to be videotaped but the rendezvous was canceled when Soukourιs asked her to meet at a public place.
When the prosecutor asked Xoulidou why she did not make a formal report, she responded that if she had gone to the police, word would have gone to the government.
Exiting the prosecutor’s office, Xoulidou said that she gave all the evidence that back her allegations, adding that she has complete trust in Greek justice. She also said that she requested that her telephone communication and email privacy be waved.
“There were specific reasons why I haven’t spoken earlier. My relations with (ANEL MP) Panagiotis Melas are excellent. He is a good colleague. I tried to protect him. I couldn’t say anything because of the ANEL party convention too. If they managed to approach me, I believe they did the same with others as well,” she said.
Xoulidou was accompanied by her lawyer Elena Tzouli (wife of ANEL leader Panos Kammenos) who stated afterward that “the specific individual does not have such large amounts of money in his possession. He is the middleman, the negotiator, in a political agreement and we are looking for the moral instigator. The witness has named specific individuals.”
Melas, who had earlier filed a lawsuit with the Supreme Court prosecutor, was next in line to testify after Xoulidou.
After his testimony, Melas said that the allegations on his bribery constitute slander, noting that he has been honest all his life. He also said that he was not informed about the allegations “not even by Xoulidou, who had the obligation to inform me, but instead she chose to appear on television.”
Among those who will be called by the prosecutor to testify, are Deputy Development Minister Notis Mitarakis, New Democracy MP Adonis Georgiadis and Giorgos Soukourιs, the man Xoulidou accused of attempting to bribe her in order to sway her vote in the forthcoming presidential election in Greece’s parliament.
ANEL leader Panos Kammenos has accused Soukourιs of being a New Democracy member and that he works for the party that needs 180 votes to elect president of the republic from the present parliament. Soukourιs refuses he belongs to New Democracy politically.
Soukourιs talked on Mega channel this morning and refuted everything. He said that he has no relations with New Democracy MPs and that no one told him to act in a certain way. He claimed that no one told him to say something bad about ANEL MP Panagiotis Melas and that in the texted message phrase “Melas took it.,” he actually made a punctuation error: he wanted to put a question mark instead of a dot.
Soukourιs insisted that he only expressed his opinion on the Melas issue and coming face to face to the MP he apologized to him. However, he admitted that he had other contacts with Xoulidou except facebook messages and telephone talks.
(source: ana-mpa)