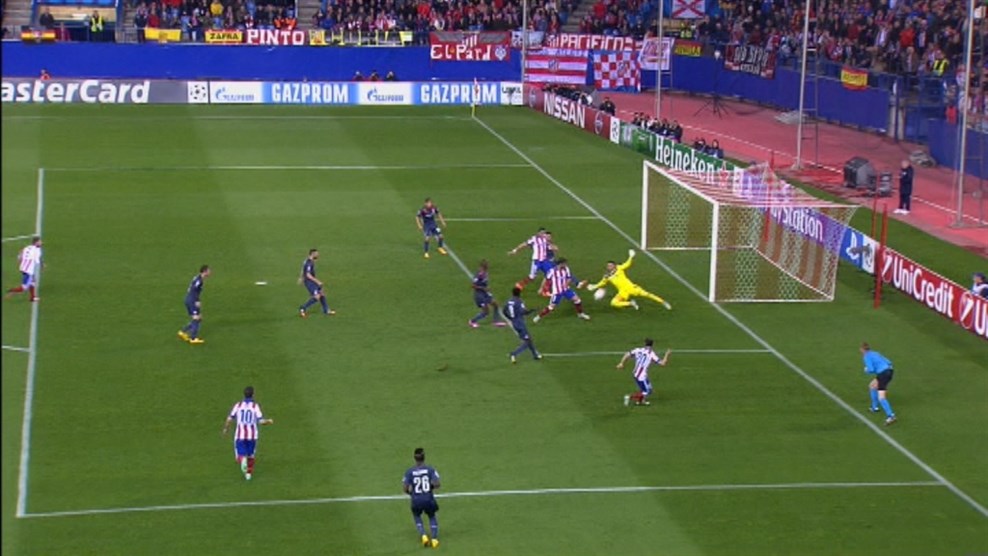 A 4-0 defeat to Atletico Madrid in Vicente Calderon stadium sees Olympiacos in third place now, dropping hopes of qualifying to the Champions League’s final 16. Raul Garcia scored the first, passing the relay to Madjukic who finished off the reds with a hat-trick.
It’s safe to say that, overall, Atletico is a stronger side. After all, they won the Spanish Primera Division, finishing above giants Real Madrid and Barcelona. However, Olympiacos’ 3-2 victory in Athens a month and a half ago, fed them hopes to gain a similar result or at least a draw. They didn’t even come close. Atletico dominated from beginning to end, had Mandjukic in excellent form, in just his first game back from injury, and thus confirmed their superiority with four goals over none.
Olympiacos defense was in shambles, Botia and Abidal never clicked, while Elabdelaoui from the right and Masuaku from the left were constantly shaking to the likes of Arda Turan and Raul Garcia. An Atletico goal was expected soon and within just ten minutes, Roberto cleared the ball poorly to the left, finding Juanfran, who passed it back to Raul Garcia, who in turn, easily booted the ball in the net.
https://www.youtube.com/watch?v=B6nncUpfQ6k
For the next twenty minutes, Olympiacos strengthened his defense and middle lines but was unable to become threatening. In a run from the left, Ansladi crossed a bouncing one in the box, which saw Botia kick the air instead of the ball in his attempt to clear it, and Mandzukic, who was waiting, placed it in goal to score his first of three and Atletico’s second.
https://www.youtube.com/watch?v=pklM1HkbotI
The second half started off the same way as the first, with Atletico mastering through the field and Michel at the sideline, shaking his head to his team’s atrocious play. After seventeen minutes in the second half, Arda Turan controlled the ball down the middle, raised his head to see Mandzukic run, and delivered a perfect ball in, only for the Croatian striker to head it in goal.
https://www.youtube.com/watch?v=ldN-rT1gW-4
We had to return to the previous decade to remind ourselves of such an appalling performance by the reds in the Champions League. Back when an Olympiacos away win was a laughing joke. It was obvious they had surrendered  their guns and in return, Mandzukic punished with his third goal, after a free-kick delivery by Fernadez.
https://www.youtube.com/watch?v=sXgeXUymY8Q
Olympiacos returns to Athens knowing that a win against Malmo in two weeks isn’t enough to qualify to the next round. Juventus stepped up in group A’s second spot after their 2-0 away win against the Swedes. They would have to lose to Atletico in Turin in two weeks time for Olympiacos to qualify. An unlikely, yet still possible outcome.