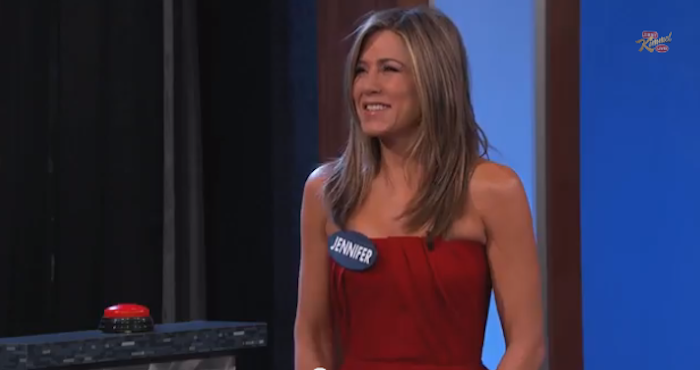 Jennifer Aniston may be the standard for class, elegance and style, but she showed off her dirty side by taking part in a game of cursing while visiting “Jimmy Kimmel Live!” earlier this week.

In a “Celebrity Curse Off” with her former “Friends” co-star Lisa Kudrow, the two actresses threw down in a battle of bad words. The premise of the game is that a curse word cannot be repeated, so after Kudrow an Aniston exchanged everything from “Holy F%ck Balls” to “C*cksucker,” the Greek-American Aniston took to her second language by using “Mal*ka” in the competition.

After host Jimmy Kimmel turned to Aniston and said, “What?!,” she replied, “It’s Greek.”

“Oh, it’s Greek? I’m gonna have to take your word for it on that one,” Kimmel replied.

Take a listen (Aniston uses the Greek word at around the 2:55 mark):

Outside of the celebrity face-off, Aniston sat down with Kimmel to talk about her frisky role in the upcoming comedy “Horrible Bosses 2,” which releases in U.S. theaters on Nov. 26.

Drinking on the Greek Island of Delos: Bring Your Own Water