Clashes Between Police and Protesting Livestock Breeders in Athens [Video] 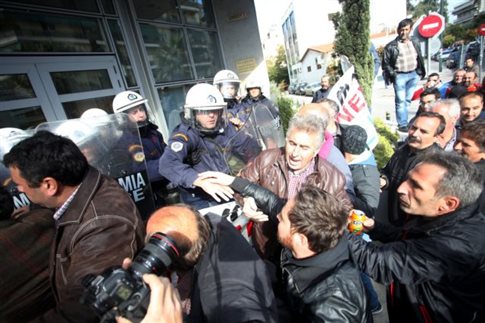 Some 600 livestock breeders from across Greece gathered earlier today in downtown Athens to protest, among others, for the inadequate protection against diseases, the compensatory allowance paid to farmers who live in mountainous regions or arid areas and the licensing process for creating and running a pen. Their demonstration started at around 9.30 am outside the headquarters of the Greek Authority of Common Agricultural Policy (CAP) Aid Schemes.

Riot police squads were blocking the building’s entrance, preventing the breeders’ representatives to enter and hand in a resolution with their demands. This was enough to create tension between police and protesters who attempted to break the debarment. Riot police made use of tear gas, while in some cases the two sides got involved in fights, before the tension was eventually de-escalated.

Later, the farmers marched to the nearby Ministry of Rural Development and Food, where Minister Giorgos Karasmanis met with their representatives who informed him regarding their problems as well as their demands. The Ministry employees held a three-hour work stoppage in solidarity, while strong police presence prevented further incidents. After the meeting with Karasmanis was completed, the breeders departed peacefully and marched to the Parliament, where they arrived at around 3.00 pm, before finally disbanding a few minutes later.