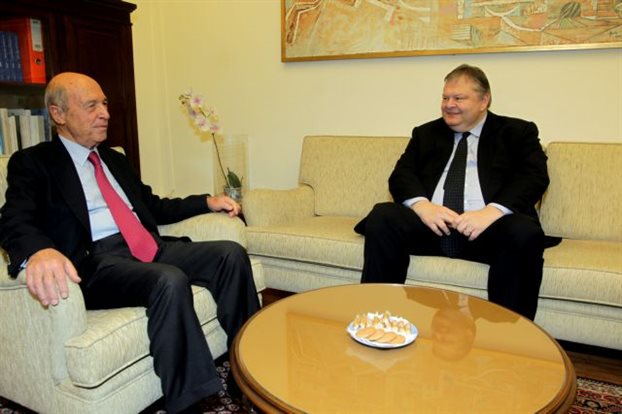 Greek government Vice President and Foreign Minister Evangelos Venizelos met with his predecessor in the presidency of PASOK and Former Prime Minister Costas Simitis earlier today, concluding the series of meetings with figurative PASOK members. The meeting focused on the ongoing political and economic developments in both Greece and Europe, and was held in Simitis’ office at the Parliament.
Addressing journalists after the meeting, Venizelos characterized the discussion with Simitis as “good and substantial.” Issues discussed were the negotiation with the partners, the economy and international matters as the tension between Greece and Turkey and the situation in Cyprus’ Exclusive Economic Zone.
“We had a substantial, in-depth discussion and exchanged views, regarding the negotiations with the Troika and our partners to complete the current program as well as the formation of the new framework and the open international focus in Cyprus and Greek-Turkish relations in particular. Obviously, we talked about the domestic political situation where the major issue is the country’s stability and the formation of the broadest possible consensus around the new President. I also had the opportunity to brief Mr. Simitis regarding the Democratic Array convention, part of which is PASOK,” Venizelos said.
Simitis’ office released the following statement: “Former Prime Minister Costas Simitis and president of PASOK Evangelos Venizelos discussed the main political issues and the developments in the economy and Greece’s relations with its neighboring countries in particular. Regarding the cooperation of the center-left forces, they agreed that the Democratic Array is an important step. Costas Simitis stressed the need to continue an intensive collaborative effort with all the movements and individuals who could contribute to the creation of the necessary strong focal point for political stability and the country’s future.”