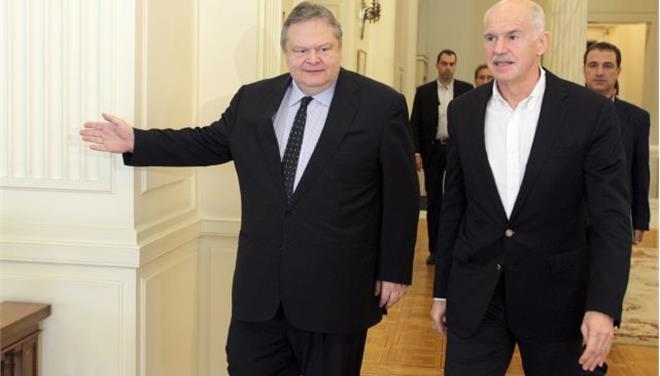 Almost an hour and 45 minutes lasted the meeting between Greek government Vice President Evangelos Venizelos and Former Prime Minister George Papandreou at the Foreign Ministry, and, according to Venizelos, it concluded in “friendly and positive” climate.

Addressing journalists after exiting the meeting, Venizelos revealed that the two men discussed international and internal affairs, as well as the country’s economic situation and the progress of the negotiations with the Troika over the future of the country’s bailout program. Questioned if the situation in PASOK was also tabled, Venizelos gave a positive answer. According to PASOK sources, the meeting, which was the first to take place between Papandreou and Venizelos in months, was of significant importance for the party, as its two key figures have repeatedly disagreed on a number of issues in the past. The socialist party, showing marks of collapse, was for more than three decades the dominant force in Greek politics, along with the current coalition government partner New Democracy.

As Venizelos underlined, similar meetings will be held in the future, as the two politicians – once inner-party opponents – will discuss proposals made by Papandreou. At a press question regarding Papandreou’s support, Venizelos highlighted that this is something he asks from everyone, while he avoided to answer a question of whether the Former Prime Minister would seek reelection as an MP in the next elections. Furthermore, he said that the general elections scenario is distant, as the current Parliament will successfully vote for the President of the Hellenic Republic in March, therefore the next elections will be held in 2016, when the government’s term is completed.

Venizelos is scheduled to have a similar meeting with Former Prime Minister Costas Simitis on Friday.