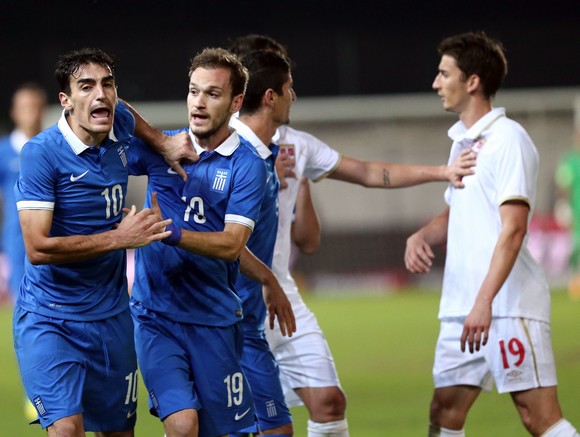 Greece was defeated for the third time in a row, this time from Serbia, in a friendly match that took place in Chania, Crete. Petrovic and Gudelj scored for the winning side.
In repetition of their recent stream of dull games, Greece were once again incapable to score, ultimately surrendering to their Serbian neighbors. The home team was unimaginative, repetitive and honestly boring to watch.
In the first game without Claudio Ranieri on their side, the Greek players did little to show that their vapid performances were his fault. Unable to complete simple passes in the attacking third of the field, Greece remained behind the half line, moving the ball between defenders and waiting for a gap in order to ascend. Serbia did a great job in clearing all pathways to their box, erasing both strikers, Stefanos Athanasiadis in the first half and Fanis Gekas in the second.
Serbia’s purpose to keep their goalkeeper inactive was working, so in addition to Greece’s hypotonic act, the first half was a waste of forty-five minutes to the fans’ eyes. In the second half, an early Serbian goal from a set-piece (free-kick) brought some sort of action to the game but most of it was field-fighting. In one instance, Panagiotis Kone raised his fist eager to punch FC Chelsea’s Nemanja Matic in the face. Thankfully, Kostas Chanas, Greece’s newly appointed coach, had the divine idea to sub him before the game turned into a cat-fight.

All that was left was the referee’s final whistle, as the fans knew there was no way to pass through the Serbian defense, so in a moment of desperation for that last call, Nemanja Gudelj stroke the ball from 40 yards out, landing it in Panagiotis Glykos’ top-right corner and ending the night in brilliance.
https://www.youtube.com/watch?v=V8ktXmr5GO4
Greece (K. Tsanas): Glykos, Papadopoulos, Manolas (73′ Moras), Torosidis (61′ Bakakis), Vydra, Maniatis, Samaris (79′ Mandalos), Kone (64′ Tziolis), Mavrias (71′ Kolovos), Christodoulopoulos, Athanasiadis (64′ Gekas).