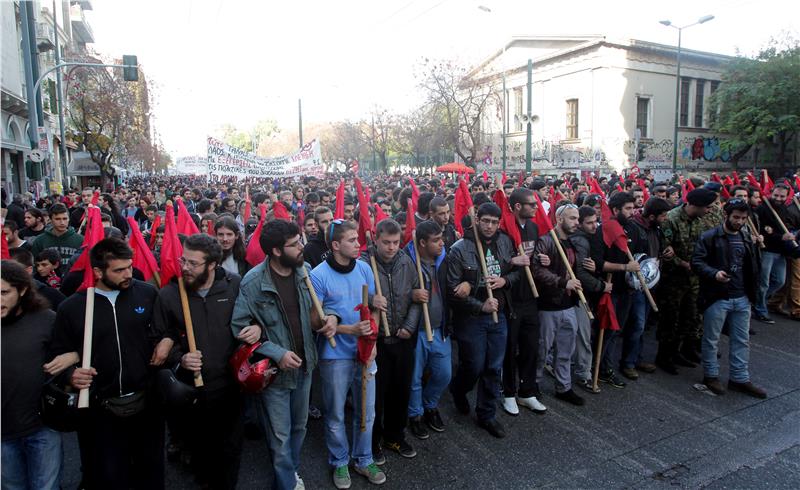 Some 20,000 to 25,000 Greeks participated in the annual protest rally to the US Embassy on Monday evening, marking the 41st anniversary of the Athens Polytechnic Uprising of November 17, 1973. The demonstration was policed by more than 7,000 officers, who were deployed in the fear of violent incidents that have taken place in previous years, as well as last week during the student demonstrations in Athens, Greece. 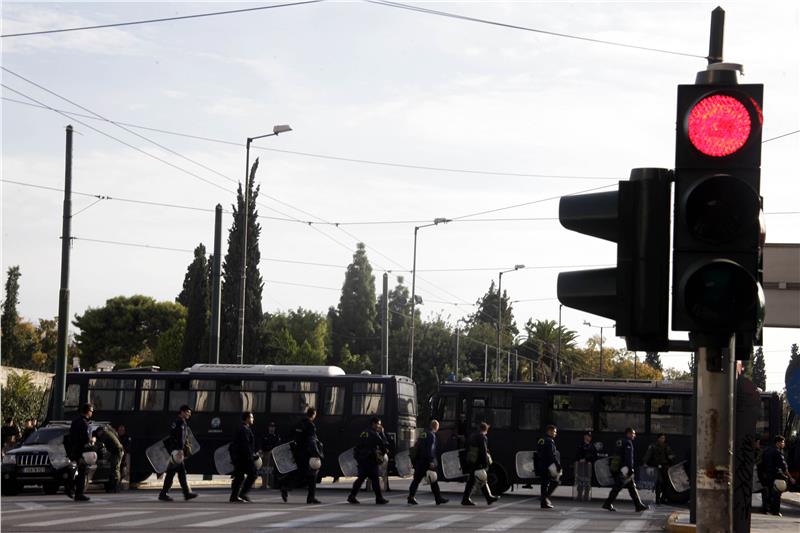 The first group that arrived outside the US Embassy, which was guarded by numerous riot police platoons, was those exiled or jailed during the seven-year military junta (1967–1974), along with a group of students holding the historic bloodstained flag of the Uprising. This first group of demonstrators withdrew after the Greek National Anthem was chanted. The protestors’ main body arrived outside the US Embassy at around 6:30 pm, before they eventually departed at around 8.00 pm, when the last protestors’ blocks – that of the Greek Communist Party (KKE) – arrived at the spot.
Earlier, minor clashes took place between a block of anti-establishment protesters and anarchists, and the riot police squads guarding the demonstration on Vassilissis Sofias Avenue, in downtown Athens, just a few meters before the US Embassy. The police made extended use of tear gas and stun grenades in order to split the anti-establishment protestors’ block. At that point, approximately 30 people were arrested, while a few individuals burned trash cans. At the Athens Tower, stun grenades were also used after tension flared up between police and protesters.
A smaller group of the protestors, who separated themselves from the demonstration’s main body, also clashed with police forces close to Alexandras Avenue, a small distance from the Polytechnic University that was also guarded by riot police platoons, as all higher education institutions in downtown Athens. Other protesters set trash cans on fire on Alexandras Avenue near the Attica region’s police headquarters.  Later, individuals belonging to anti-establishment groups moved towards the district of Exarchia and the clashes continued for almost an hour, in the streets around the district’s square. According to Greek Police, another 30 people were arrested there. The street fights and the use of chemicals by police forces led four protestors and one police officer in the hospital with minor injuries. 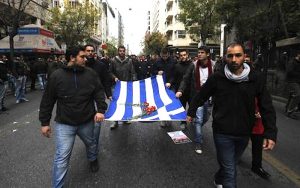 This year’s participation in the anniversary demonstration commemorating the November 17 Uprising was the highest compared to the latest years, due to the incidents that took place in Athens last week, when students clashed with police, while protesting against the deployment of riot police squads outside universities to prevent sit-ins.
Similar anniversary demonstrations were also organized in most major Greek cities, while in Thessaloniki, in Macedonia, and Patras, in the Peloponnese, minor clashes also took place.