Some 25,000 people from 118 countries participated in the Istanbul Marathon — the only marathon course in the world that crosses two continents. The Marathon was completed earlier today with great success, among light rain.

The 42,195 race, crossing the Bosphorus bridge from the Asian to the European side of Istanbul, started at 9:00 a.m. with a time limit of 5 hours and 30 minutes, after which traffic re-opens and participants are asked to run on the sidewalks. An IAAF Gold Label event for the past three years, the Istanbul Marathon is amongst the top 10 Marathons in the world.

Watch our video from the event:

Ethiopian Amane Gobena was the winner in the women’s race, finishing in 2 hours, 28 minutes and 46 seconds, followed by compatriot Salomie Getnet and Ukranian Olena Burkovska in 2 hours 30 minutes and 36 seconds and 2 hours 31 minutes and 30 seconds respectively.

Watch exclusive photos of the unique event below:

The event began 300 meters before the Bosphorus bridge on the Asian side and Istanbul Mayor Kadir Topbas together with the Turkish Sports and Youth Minister Akif Kılıc were there to support the event. “Today, people will run for the love of Istanbul. Istanbul is a beautiful city between two continents. We will experience this beauty together,” Topbas said, before giving the signal to start the race.
Apart from the 42-kilometer route, participants also run 10 and 15-kilometer courses.

Our Preferred Partner Hotel in Istanbul: 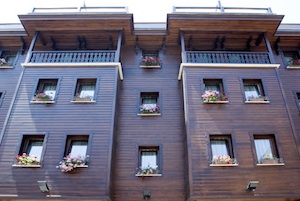 Sirkeci Mansion may be defined as one of the best independently operating hospitality enterprises in Istanbul. Sirkeci Konak, as is its Turkish name, is the No1 hotel in Istanbul, according to tripadvisor ratings.  The word “Konak” is defined as a large mansion house which is generally used as an official residence in Turkey and the former Ottoman Empire. Sirkeci Mansion is located on the historical peninsula, also known as “Old City” the ancient part of Istanbul and in a few minutes walking distance to major historical areas such as; Hagia Sophia, Blue Mosque, Gulhane Park, Baslica Cistern, Topkapi Palace, Eminonu Port. The hotel has one panoramic terrace restaurant, an indoor restaurant and two meeting rooms.