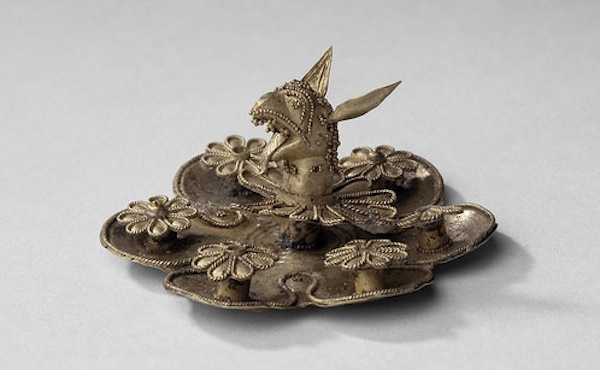 The Louvre inaugurated an exhibition devoted to the southeastern Aegean island of Rhodes on Friday, which will run until February 10, 2015.

“Rhodes, a Greek Island and Gateway to the East” brings together artifacts from four institutions: the British Museum (80 items), Copenhagen (30), the Louvre (120) and the Rhodes Museum (150), covering Rhodian art from the 14th century BC (Bronze Age) to the 6th century BC (Archaic period). The artifacts were excavated by archaeological teams of five nationalities who have worked on the island – Danish, English, French, Greek and Italian.

According to the museum site, the exhibition “highlights the cultural mix of Rhodes, a land of trade in the Eastern Mediterranean. It also provides an opportunity to rediscover the Orientalist nature of Rhodian art through some of its most spectacular productions, particularly its gold and silver works, unique to Greece, and its faience with ties to Egypt and the Levant.”

French co-curator Anne Coulie told Athens-Macedonian News Agency that the museum wanted to give the public the opportunity to learn about Rhodes as a place where many civilizations met and traded, and to show the influences the island’s art received from the Middle East and Persia.

Co-curator Melina Filimonos-Tsopotou, director emerita of the Museum of Rhodes antiquities, said that it is the first time an international exhibition is held on Rhodes and it will show the discoveries from excavations that began in the 19th century.

Hi-Tech Face Mask With Sensor Could Detect COVID and Flu