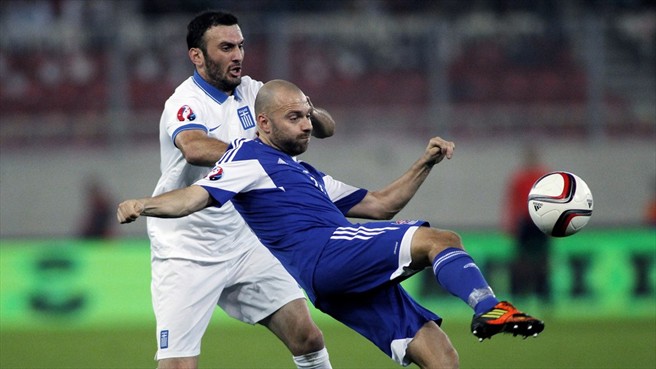 Greece have just lost 0-1 to the Faroe Islands for the Euro 2016 qualifiers in one of the biggest upsets in the history of football!
The little island country north of the UK is celebrating their most important sport’s victory ever. With a goal from Joan Edmundsson in the 61st minute, the 187th FIFA ranked team grabbed its first three points in this qualifying competition and climbed up a position, while simultaneously sinking Greece to the bottom of group F. It seemed like the match from which Greece could set a new start, after struggling in their first three games, collecting just one point in their away tie in Finland and losing their two home games to Romania and Northern Ireland. After all, their opponent hadn’t won an away match since 2001 when they met Luxembourg.
Besides the final 10-15 minutes when the ball remained deep in Faroe‘s box, Greece looked inactive as in a state of hibernation. The whole team was carried away by their inability to put a decent attack together, letting their opponents do all the work instead. And it worked just fine for them.
Twice in the first half they came close to scoring, first with a free kick shot to the post and then with a one-on-one chance that was rescued by Greek goalie Orestis Karnezis.
In an attempt to re-organize his banal side, Claudio Ranieri subbed Stafanos Athanasiadis in place of Fanis Gekas who in his first appearance since the FIFA World Cup managed to walk away unnoticed.
Neither that move, nor any of his next two (Haris Mavrias in for Karelis and Petros Mandalos for Karabelas) made a difference and to make matters even worse, in between all that, striker Joan Edmundsson of Havnar Bóltfelag caught the ball in the air and with swinging left vole stroke the ball in the back of Karnezis’ net.
In the remainder of the game, Greece managed to hit the post with Panagiotis Kone and get a few crosses in by Lazaros Christodoulopoulos but neither was enough to prevent Greece’s most humiliating loss in their last 12 years.
https://www.youtube.com/watch?v=z48_KifnCCY
GROUP F
1) Romania   10
2) N. Ireland  9
3) Hungary    7
4) Finland     4
5) Faroe Isl.  3
6) Greece     1