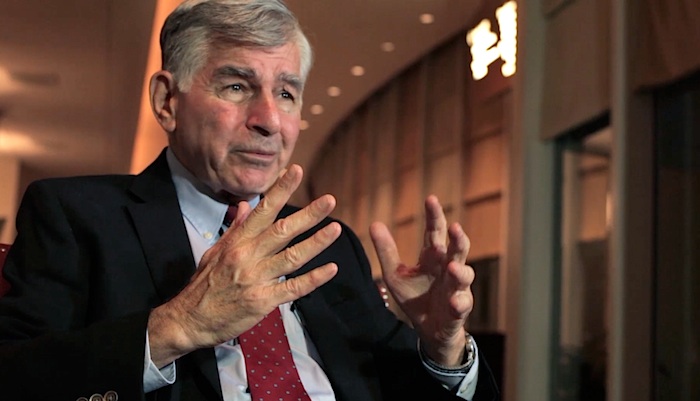 Governor Deval Patrick today rededicated South Station as “Governor Michael S. Dukakis South Station Transportation Center” in recognition of the former Governor’s devotion to public transportation and advocacy. Today’s ceremony at the newly-named South Station included the unveiling of a plaque on the corner of Atlantic and Summer Streets and an inscription outside of the bus terminal on Atlantic Street.

During his time in office, Governor Dukakis was known to take the Massachusetts Bay Transit Authority (MBTA) and received national attention for his public transit ridership, and he supported increased transportation funding to improve and extend subway and commuter rail service in order to promote economic growth and increase equitable opportunities across Commonwealth communities. A key measure within Governor Dukakis’ transportation initiatives was safety, helping to ensure that riders felt safe while riding transit. This focus resulted in the MBTA Police becoming the first department in Massachusetts and the first Transit Police Department in the country to be accredited by the National Commission on Accreditation for Law Enforcement Agencies (CALEA).

“This is a fitting tribute to Governor Dukakis, who oversaw a renovation of South Station while in office and made transportation one of his top priorities,” said Congressman Michael E. Capuano. “Governor Dukakis is a vocal champion of improving and expanding public transit, recognizing its importance to our economy and quality of life. His advocacy resulted in an expanded MBTA transit map and increased transportation funding.”

“Public transportation is designed to be efficient, dependable, and professional – just as Michael Dukakis was throughout his career,” said Congressman Bill Keating. “Michael was ahead of his time in his commitment to commuter rail service. He knew it wasn’t just about transportation, but about how communities grew and prospered because of this service and how Boston’s economy grew because of that link. Michael was behind most modern transportation advancements in the Commonwealth. It is only fitting that his name is officially linked to a great transportation hub.”

“Safety is a core value for our entire transportation system, no matter the chosen mode,” said Acting Secretary Frank DePaola. “Governor Dukakis saw an opportunity to enhance the level of safety we adhere to throughout our transportation system to make sure that our rails, roads, and bridges are safe by bringing that level of trust back directly to our transit riders in their everyday rail experience. His work plays a large role in today’s successful subway and commuter rail ridership.”

South Station opened in 1898 and underwent a complete overhaul in the 1980’s while Dukakis was in office, allowing for increased capacity and direct access to Red Line service. South Station is the busiest station within the entire MBTA system and currently serves over 25,000 riders on a typical weekday, not including Amtrak and private bus passengers.

“No one has done more to promote rail transportation across the United States than former Governor Michael Dukakis,” said Senator Cynthia Creem. “Thanks to his leadership the entire Northeast Corridor continues to benefit economically and environmentally. Building a North-South rail link will complete his 21st century vision of a Maine to DC passenger line, and I hope we will be back to celebrate that construction!”

Under the Dukakis Administration, the Red Line expansion into North Cambridge and Somerville allowed for the March 30, 1985 opening of Alewife Station. In addition, Governor Dukakis oversaw the purchase of the majority of the rail lines that serve Eastern Massachusetts, allowing for the MBTA to strengthen their reach across these lines. The expansion of the Orange Line north to Malden and the relocation of its southern portion were projects also headed by the Dukakis Administration.

“Governor Dukakis has always understood the importance of connecting South Station to Boston’s neighborhoods. He championed surrounding rail stations with high-density development long before planners even coined the term transit-oriented development,” said Mayor Martin J. Walsh. “By dedicating this grand facility to Governor Dukakis we are dedicating it to the people he connected by public transportation.”

“Governor Dukakis was a visionary who blazed a trail for future transportation infrastructure and needs,” said City Councilor Stephen J. Murphy. “The renaming is a fitting tribute to a leader who made Massachusetts a leader in the area of public transportation.”

In 1988, Governor Dukakis was the Democratic nominee for President. Following his nomination, he served on the Amtrak Board of Directors as a passionate advocate for improved high-speed rail. Currently, Governor Dukakis is a distinguished professor of political science at Northeastern University, home of the Michael & Kitty Dukakis Center for Urban and Regional Policy, and a visiting professor at the School of Public Policy at the University of California in Los Angeles where he leads research focused on transportation issues, national health care policy reform, and the lessons that national policy makers can learn from state reform efforts.