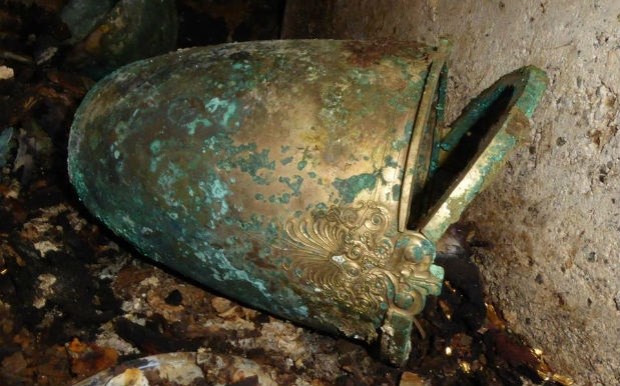 An unlooted tomb that appears to belong to a man who died during the Alexander the Great era has been unearthed in Vergina, northern Greece, where the tomb of Philip II was found.
Archaeologist Angeliki Kottaridi who is the head of the excavation suggests that the tomb in Aagae, as Vergina was called in ancient times, is unlooted because they found impressive burial offerings, with a gold-plated bronze vessel and a gold-plated bronze wreath among them.
On a Facebook post, Kottaridi uploaded two photographs of the tomb and that prove that it hasn’t been looted. She notes that it was a pleasant surprise, since the necropolis in Aegae had been plundered by Pyrros’ mercenary army in 276 B.C. and that it is very rare to find unlooted burial grounds.
Kottaridi suggests that the person buried in the tomb died during the reign of Alexander the Great (336-323 B.C.) and that the burial offerings found are of great significance. The gold-plated vessel for example is a container that ancient Macedonians used to mix wine with water. She also says that she posted the pictures for people “to marvel at the exceptional level of Macedonian Metallurgy.” Various pieces of wood found around the vessel seem to belong to the daybed of the dead.
Kottaridi says that all the unearthed offerings will be restored and they will be exhibited at the inauguration of the new archaeological museum in Aegae.