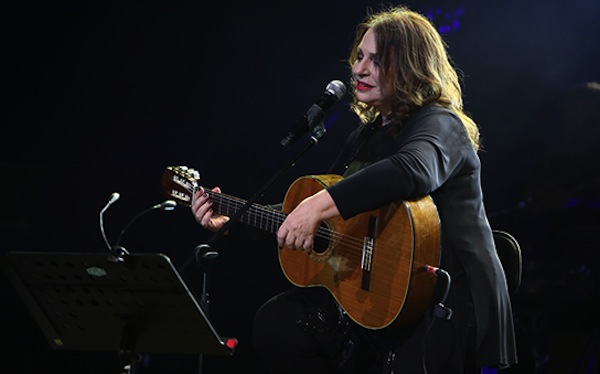 This concert was attended by more than 5 thousand fans, who gave the singer a very warm welcome, singing along to many songs throughout the evening. Alexiou performed many of her hits, including songs that have been translated in Turkish and have been performed by well-known Turkish artists.

She expressed her gratitude and love for Turkey and said that music unites the two countries. She also stated that she was very excited to perform for the Turkish audience, something she has done many times in the past.

Alexiou is considered one of the most popular singers in Greece and has been commercially successful since the 1970s, working with important Greek songwriters and composers. She has performed at top musical theaters all over the world and has received several awards.

With over thirty albums under her belt and many recordings that have been featured on the albums of other notable musicians, she is known worldwide for her rembetiko and Greek folk songs. Since her family’s roots are from Izmir, she is also well familiar with songs from the area, which she usually includes in her Turkish concert repertoire as a reminder of the music that binds the two nations.

In her repertoire last Saturday she included her hits that have been translated in Turkish, such as “Ola Se Thimizoun” (Everything reminds me of you) “Olmasa Mektubun” (Without your letter),“Telli Telli” (Demoiselle, demoiselle), Pes Mou Pos Ginetai (Tell me, how is it possible?) “Maskeli Balo” (Masquerade), “Mia Pista Apo Fosforo” (A floor of phosphorus) “Her şeyi yak,” to name a few.