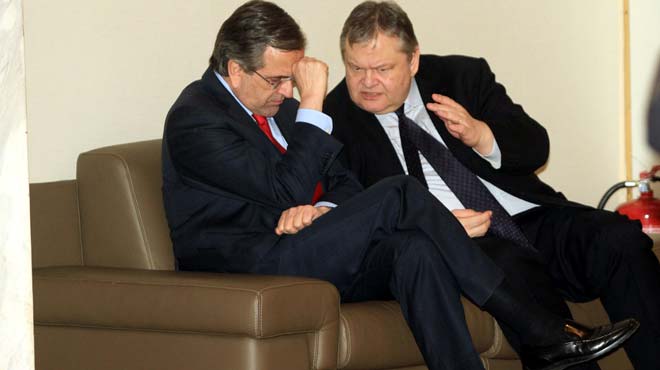 Greek government Vice President Evangelos Venizelos characterized the negotiations with the country’s lenders as “rough and challenging” after his meeting with Prime Minister Antonis Samaras. The coalition government partners’ meeting focused mainly on the ongoing negotiations with the Troika, ahead of the next Eurogroup on December 8, where Greece’s next day strategy will be decided, as well as the reforms that need to be completed in accordance with the lenders’ guidelines.

Venizelos described the negotiations as worthwhile, as they are the last before the country’s exit from the memorandum. Questioned whether the Troika’s representatives are to return to Athens soon, he gave an affirmative answer, adding that “the Greek people will have a clear image of the final decisions and the agreement with our partners before the Presidential vote,” which, according to the Constitution, is scheduled for February 2015.

Samaras and Venizelos were also informed by Finance Minister Gikas Hardouvelis over the latest Eurogroup’s results, in which it was repeated that the International Monetary Fund (IMF) should remain in Greece’s bailout program.

Addressing the journalists, Venizelos said that the government now has a double target: The completion of the country’s review by its lenders and the organization of the next day, in the framework that the EU will set. “We want Greece equivalent with its partners in the Eurozone but with a safety net that would prevent the markets from playing games against us,” Venizelos declared. Finally, he repeated that the current coalition government offers the country the only sustainable route to exit the supervision, while what the opposition parties propose are “choices of high risk.”