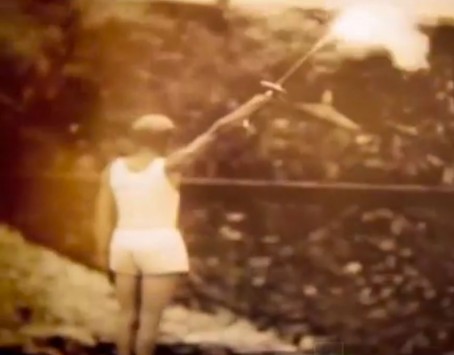 The Greek Ministry of Tourism has been forced to re-edit a tourism video unveiled in London this week because it contained footage of the 1936 Olympics held in Berlin under Hitler.
The clip depicting the torch lighting ceremony at the infamous pre-war games, would be “removed immediately” officials said, after being alerted to the gaffe by the Guardian.
The video, made to promote Greece as a tourist destination, was presented during the World Travel Market, a very important event for the global tourist industry.
According to the Guardian report, the original version of the video had been taken down from YouTube. The promotional video was shot to commemorate 100 years of the Hellenic Tourism Organisation (EOT). At about eight minutes into the footage, a blond athlete is holding the Olympic torch aloft as he runs up a stairway to light the cauldron.
The particular clip, which lasts for about a second, is from a propaganda film directed by Leni Riefenstahl, Hitler’s favorite film-maker. The footage of the 1936 Olympics was shot by the German director for the sole purpose of promoting the ideals of Aryanism and show the supposed superiority of Germans. This was the first time that the ceremonial relay of the Olympic flame was introduced.
Panos Livadas, General Secretary of the Hellenic Tourism Organisation, said that, “In the sequence, a scene from the 1936 Olympics was mistakenly included which we will immediately remove and rectify.”
Greek officials admitted the error claiming it was a technical oversight. They also said that there should not be given undue emphasis to the unfortunate incident. Especially at a time when tourism is the most important sector of the Greek economy.