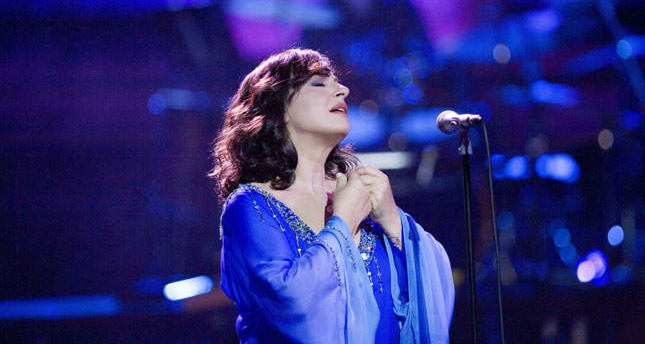 Popular Greek singer Haris Alexiou, will be performing tomorrow at the Istanbul Congress Center in Turkey, as part of the Fifth Avea Extraordinary Music Concerts. She is expected to sing some of her old and new songs.

Alexiou stated that she is very excited to perform for the Turkish audience, something she has done in the past many times and did not forget to mention that her family’s roots are from the Asia Minor city of Smyrni, or İzmir.

She gave an interview at the Anadolu Agency (AA) where she stated that Greece and Turkey have “so much in common.” She added that Turks and Greeks lived together for a long time and this is reflected in the music of both nations.

“If politicians could be like us, there would be no problems between Greeks and Turks. It is funny that although the nations live together peacefully, there are political problems between them,” she said. She further stated that music cannot solve political issues alone and continued, “Music can only pull two nations together, however, maybe the new generation can find solutions for these problems. I visited Turkey many times and each time people gave me a warm welcome.”

Alexiou is considered one of the most popular singers in Greece and has been commercially successful since the 1970s. She has worked with important Greek songwriters and composers, has performed at top musical theatres all over the world, and has received several awards.

She has recorded over thirty albums and has been featured on albums of other musicians. She is known worldwide for her rembetiko and Greek folk songs. Since her family’s roots are from Izmir, she is well familiar with songs from the area, which she usually includes in her Turkish concert repertoire, as a reminder of the music that binds the two nations.

Eight of her personal albums released between 1977 and 2003 have surpassed 1.5 million sales, the only Greek female singer to do so. She also has an audience in Turkey and her various songs were sung in Turkish especially “Ola Se Thimizoun” (Everything reminds me of you) as “Olmasa Mektubun” (Without your letter) by Yeni Türkü, Erol Evgin, Müslüm Gürses, Sevda Karababa and Pilli Bebek; Teli Teli Teli as “Telli Telli” (Demoiselle, demoiselle), Pes Mou Pos Ginetai (Tell me, how is it possible?) as “Maskeli Balo” (Masquerade) by Yeni Türkü, Athena, Sagopa Kajmer and Ata Demirer; Mia Pista Apo Fosforo (A floor of phosphorus) as “Her şeyi yak” by (Burn everything) Sezen Aksu and as “Nefes Almak İstiyorum” (I want to breathe) by Yonca Evcimik; Krata Gia To Telos (Keep it to the end) as “Sebahat Abla” (Elder sister Sebahat) by Müslüm Gürses.