Director of British Museum: ‘No Intention to Return Parthenon Marbles’ 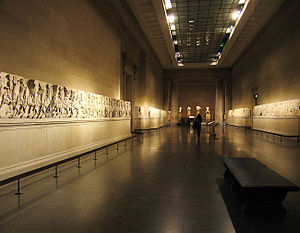 London’s British Museum Director Neil MacGregor issued a provocative statement to British media today, reiterating that there is absolutely no intention from the British side to return the Parthenon Marbles to Greece.

He repeated that “the museum’s long-held position is that the acquisition of the famous sculptures by Lord Elgin at the start of the 19th century was legal and that there was ‘maximum public benefit’ in them remaining in London where they are seen in the context of world culture,” British newspaper Evening Standard reported.

According to the newspaper, MacGregor said that the Greek government’s efforts to repatriate the Marbles is not going to bear any fruitful results.

“Yet the museum is coming under the most sustained attack for decades from the Greek government, whose call for the works to be repatriated is now being fought by a team including lawyers Geoffrey Robertson and Amal Clooney,” it mentions.

The newspaper further mentioned that approximately one-third of the Parthenon Marbles are in London, while about the same number remains in Greece.

“Quite a lot of them no longer exist. So there’s no possibility of recovering an artistic entity and even less of putting them back in the ruined building from which they came,” he said.

MacGregor, in another interview at “The Times”, said today that “there is no possibility of putting the Elgin Marbles back” as they officially belong to the British Museum and that the British government cannot negotiate on the Museum’s behalf.

Turkey announced on Monday that it will conduct a large-scale naval exercises in the Mediterranean and the Aegean Sea between February 25 and March 7.
Cyprus