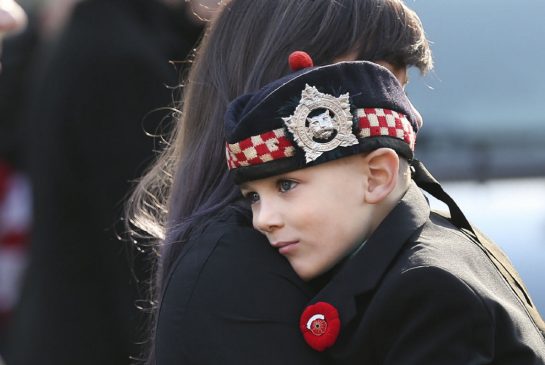 Greek-Canadian artist Katerina Mertikas has donated a painting to be reproduced in order to raise money for Marcus Cirillo’s trust fund. Marcus is the son of Nathan Cirillo who was slain in a terror attack while standing sentry at the Tomb of the Unknown Soldier in Ottawa.

Mertikas made a painting of soldier Cirillo standing at the Tomb of the Unknown Soldier and being saluted by his young son. The painting was intended to be included in her new exhibition but she decided to have it reproduced.

With the help of Koyman Galleries, she made signed reproductions of the 12″ by 12″ painting on stretched canvas. They will be sold for 124 dollars each, with the last two digits representing Cirillo’s age, and all profits will go to the fund set up for five-year-old Marcus.

“We’re just trying to do something that is memorable and honorable,” Mertikas said. “Hearing that he had a son, just made me almost ill. . . As a mom, this also tugged at my heartstrings. No mother should bury her child,” she told the Ottawa Citizen.