Reuters for Tsipras: From Firebrand to PM-in-Waiting 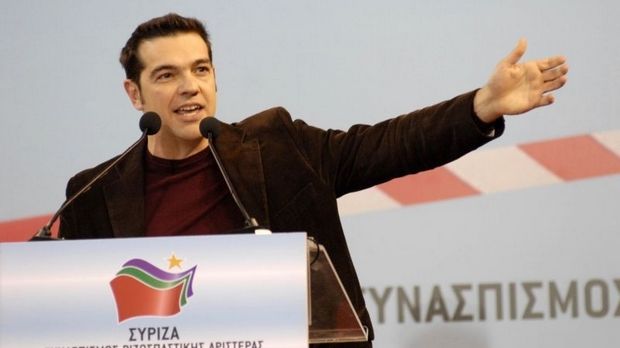 Greece’s main opposition SYRIZA leader, Alexis Tsipras, was profiled by Reuters in an article published today entitled “From firebrand to PM-in-waiting, Greek leftist smells power.” According to this, the 40-year-old politician has recently softened his confrontational tone with Greece’s international lenders, and has drafted an agenda for the first 100 days of a future government, which as polls show will be formed by his party.

“SYRIZA, once a fringe far-left movement, is now the most popular party in Greece, representing the many voters who feel punished by the country’s EU/ IMF bailout. In May, the party easily won European elections and gained the governor’s seat for Greece’s most populous region. Today, it polls higher than any other party, leading by a margin of between 4 and 11 points over Prime Minister Antonis Samaras’s conservatives. One poll shows Tsipras as the most popular political leader in the country,” Reuters explains.

While SYRIZA still opposes the radical austerity measures and is talking about a “humanitarian crisis,” it no longer threatens to tear up the agreement but is willing to negotiate instead, stating it supports the Euro. “SYRIZA’s transformation mirrors the political progression of other anti-establishment fringe parties, such as the Northern League in Italy, that changed tactics after gaining parliamentary power and became more mainstream political forces. It also reflects how Greece has turned a page on the dark days of the eurozone crisis four years ago, when Athens’ profligate spending risked bringing down the entire euro project. Then, a Tsipras victory at the polls was widely seen as a trigger for a bank run and Greece’s exit from the euro,” the report stresses.

Regarding its leader’s transformation from the Euro’s “troublemaker” to a leader that is willing to table the issues concerning the Greek economy with European partners, Reuters concludes that today’s Alexis Tsipras, “is not the one of 2010. Since the last election SYRIZA’s rhetoric has calmed down. Tsipras is preparing for the fact that he might be leading a government so he needs to prove that he is approachable and flexible.”