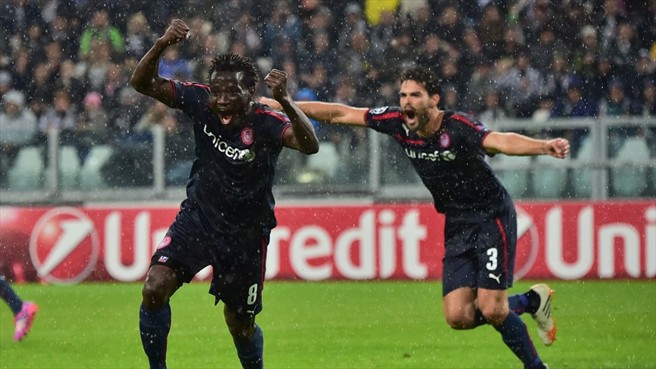 Olympiacos put in an amazing effort today to win the three points and sit on top of Group A, but a 2 minute loss of concentration (65′-66′) gave the chance to Juventus to turn the score around (3-2) and grab their second win of the tournament. Andrea Pirlo, Roberto with an own goal and Paul Pogba scored for the Italian champions while Alberto Botia and Delvin Ndinga found the net for the Greeks.
It was obvious from the start of the game that the home team will focus on a fast goal to knock away any stress-related boos from the crowd whom have lost their patience with Juventus’ puerile behavior in their last games.
Their attacking efforts were handsomely swept away by Olympiacos’ defenders till Andrea Pirlo decided to show off his skills that have made him one of Italy’s all-time idols when at the 21st minute he delivered an excellent curved ball in Roberto’s right corner. 1-0 for Juventus The audacity with which Juventus’ players ran their plays, made us all believe that the second one was on its way. Everyone besides Michel and his players and specifically Alberto Botia who was called to rescue with a brilliant header that turned Gianluigi Buffon into a statue. 1-1 An amazing game was in play and it got even better in the second half when Giannis Maniatis crossed the ball in the box and midfielder Delvin Ndinga delivered another excellent header which made Buffon react this time, but not rapidly enough to prevent the goal. 2-1 for Olympiacos The 2.700 Olympiacos fans in the Juventus Stadium were going frantic and it was within those moments that Juventus found the gap in their opponents concentration and just four minutes later a cross in the box was met between Alberto Botia’s and Fernando Llorente’s heads, then to the right post and Roberto’s right shin and magically ended behind the net. 2-2 The underwhelming sensation was almost too hard to cope for Olympiacos players and just one minute later, the MVP of the game Paul Pogba found space outside the box and with a firecracker shot towards Roberto’s right corner to give the lead back to La Vecchia Signora. 3-2 for Juventus In the last few minutes of the game Olympiacos tried to clean up the mess but in the process it was made worse by a penalty that was rewarded to Carlos Tevez who cleverly threw his body down once Milivojevic stuck his foot out. It wasn’t a clear contact but nonetheless the penalty was given.
In remembrance of his sensational performance two weeks ago when he cleared all pathways to the net, Roberto justified the hype around his name when he punched out the wonderfully taken penalty-kick by Arturo Vidal. It might not have brought back any smiles on the players’ faces but if both teams end up with the same amount of points, Olympiacos will through to the final 16 because of the away goal rule. (1-0 at home, 2-3 away)
CLICK HERE TO WATCH THE JUVENTUS – OLYMPIACOS GOALS
Juventus (Max Alegri): Buffon, Lichtsteiner, Asamoah (83’ Pereyra), Bonoucchi, Chiellini, Pirlo, Vidal, Pogba, Marchisio (70’ Padoin), Morata (58′ Llorent), Tevez.