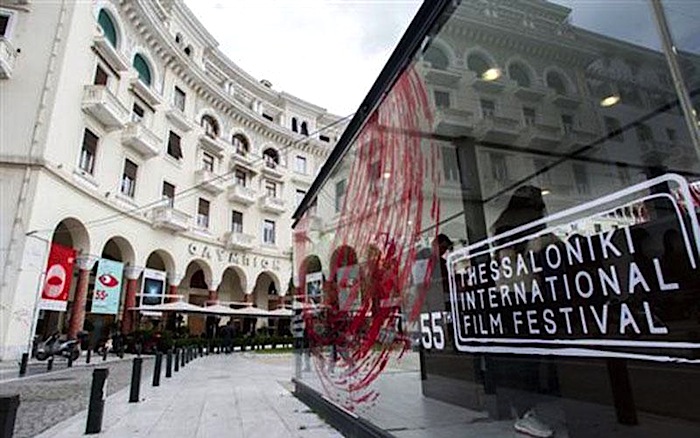 The 55th Thessaloniki Film Festival in Greece, started yesterday with actress Pinelopi Tsilika presenting the ceremony.
President of the Thessaloniki Film Festival Dimitris Eipidis gave a short opening speech in the context of this year’s festival which includes a tribute to Greek cinema, which became 100 years old this year.
Thessaloniki Mayor Yiannis Boutaris also gave an opening speech for the festival that reached its 55th year and is one of Thessaloniki’s most popular international events. A total of 150 films will be shown this year, including the Greek films.
The opening ceremony had two big absences: that of special guest Hungarian director Kornél Mundruczó, whose film “White God,” a study on human relations, was the first screening; absent also was German-Turkish director Fatih Akin.
Other than the tribute to Greek cinema, the 55th Thessaloniki Film Festival will also include homages to German actress Hanna Sygulla, Serbian director Zelimir Zilnik, Swedish director Roy Andersson and American director Ramin Bahrani.
Many world premieres will be shown at the five cinemas of the festival, namely Olympion theater and the four theaters in the port, named after the directors John Cassavetes, Tonia Marketaki, Stavros Tornes and Frida Liapa. There will first be screenings of the new films by directors Fatih Akin, Jean-Pierre and Luc Dardenne, Antrei Zviangkitsef, Kristian Petsolnt, Ole Christian Madsen and more.
The festival ends on November 9, with the awards and the closing ceremony. Four important figures of Greek cinema will be awarded for their contribution to the art: Actresses Voula Zoumboulaki and Anna Synodinou and directors Pantelis Voulgaris and Lakis Papastathis.