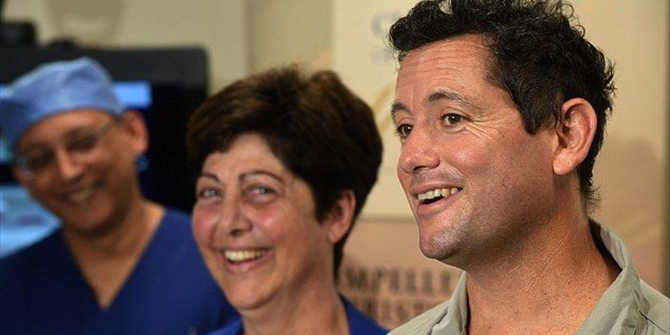 When the father of young Australian Zammit Doujon found out that his son – who had been gravely injured in an incident outside a Mykonos nightclub in Greece – had passed away, he decided to donate his son’s heart in order to save the life of Gribilas.

Six years later, the story repeats itself, only this time it was Gribilas’ mother, 57-year-old Michelle, who was suffering from congenital heart disease and was in need of a heart transplant. However, the operation was unique this time.

Michelle Gribilas, who resides in Sydney, was the first person to ever receive a heart transplant from a person who was not only brain dead, but actually dead. The donor’s heart had stopped beating 20 minutes before her operation. Thanks to a special, innovative device, called “heart-in-a-box,” the heart was kept warm, the heartbeat was restored and a nourishing fluid helped reduce damage to the heart muscle.

“I’m alive again and I feel like a different person altogether. I feel 40 years old again,” said the Greek-Australian patient. She thanked the doctors of St Vincent’s Hospital in Sydney from the bottom of her heart.

43-year-old Jan Damen, who also received the surgery, talked about a medical miracle. A third patient is now recovering from the same operation. Doctors believe that this technique can save up to 30% more lives.