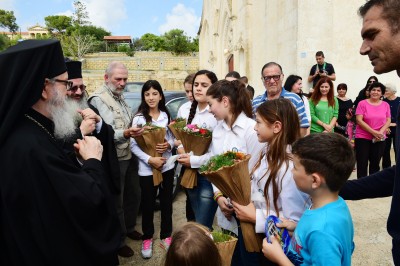 Archbishop of America Demetrios visited the few remaining Greek Cypriots in the villages Agia Triada Yialousas and Rizokarpaso and the Apostle Andreas monastery in the Turkish-occupied Karpasia, northeast Cyprus.
The archbishop also visited occupied Famagusta and particularly the grave of Apostle Varnavas, patron saint of the Church of Cyprus. This was the first time Demetrios crossed to the Turkish-occupied part of Cyprus and he was accompanied by American Ambassador to Cyprus, Jogn Koenig, according to an Eleftheros Typos daily report.
In Karpasia, the peninsula “of saints and heroes” as they call it in Cyprus, Bishop of Karpasia Christoforos welcomed Demetrios. In the village Agia Triada Yialousas, the archbishop did a memorial service on Yiannakis Liasis, a 21-year-old soldier who died in battle against the invading Turks in 1974.
Demetrios had coffee at the village coffee-shop and talked with the local Greek Cypriots who consider themselves trapped inside Turkish land and saw the visit of his holiness as a ray of hope.
A similar reception was held at the Rizokarpaso village, where students of the local school welcomed the archbishop holding cherubs and flowers. In the church of Agios Synesios in the village, Demetrios said that “your brothers in America pray for you and try to help you any way they can.” He also said that the Church of Greece and the diaspora fight to help Rizokarpaso become a part of free Cyprus again.
Ambassador Koenig thanked the people of Karpasia for the warm welcome and said that the United States of America will do whatever is best for the Greek Cypriots of Karpasia. “You are the core of hope for a united Cyprus,” Koenig said.