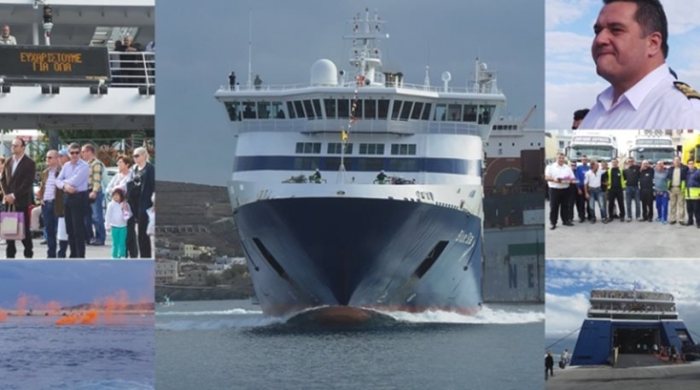 The Blue Star Ithaki has been sold and will soon begin its long journey to Canada, its next country of operation. On Saturday, October 25, the crew of the Blue Star Ithaki tearfully began their last journey along the Piraeus-Syros-Tinos-Mykonos route.
Shortly before 4pm, the ship arrived for the last time at the port of Syros before returning to Piraeus. Since 2000, the Blue Star Ithaki has left its mark on the island. The island’s residents had a special kind of love for the ship that transferred millions of tourists back and forth from the island for fourteen years. The ship’s departure has caused great sorrow for the residents, some of whom feel that the Ithaki will not be easily replaced.
Upon its last arrival in Syros, the crew bid a touching farewell to the islanders by sailing close to the island’s west coast and sounding its whistle.
The ship entered the port of Syros for the last time and was welcomed by passengers, representatives of the municipality, members of the Port Authority of Syros, and many residents who wished to see the ship for the last time.
The captain, Elias Verveniotis, left the ship for a few moments in order to greet the president of the municipal port of Syros, Dimitris Kosmas, and several of his close friends. He was unable to hold back his tears.