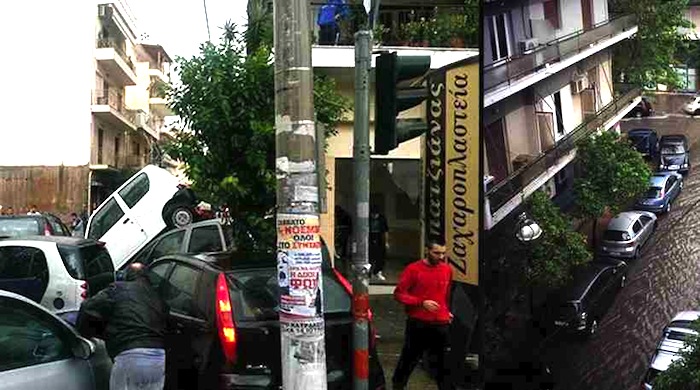 Terrifying implications and unspeakable disasters were caused throughout the day in Athens, Greece, and the entire Attica region due to the heavy rainfall that flooded streets, houses and shops. State authorities as well as Athenians were caught, once again, unprepared and many of the city’s central streets were closed for hours.

According to information from the Athens Fire Department, the parking of a supermarket was flooded in the Ilion area, trapping almost 12 cars inside, while in Peristeri, Thrakomakedones and downtown Piraeus, dozens of households were also flooded and many more had no electricity. At the same time, the stream traversing the suburb of Nikaia, overflowed and swept away cars, flooding parts of the area, with images presenting scenes of biblical destruction. At the corner of Valaoritou and 25 March street, the flood swept twenty to thirty cars into a pile up. In some cases, the water reached one meter in height and drainage grates turned streets into streams, carrying away cars, garbage bins and other objects, in many instances, putting people’s life at risk. The Fire Brigade received more than 500 emergency calls, mainly from the western suburbs of Athens and Piraeus. Problems were also noted at the railway network. From their side, shopkeepers reported that damages caused to their businesses by the floods may exceed 100,000 euros.
Greek Prime Minister Antonis Samaras, who was in Brussels attending the Eurozone leaders’ summit, is hastily returning to Athens to coordinate the state mechanism.