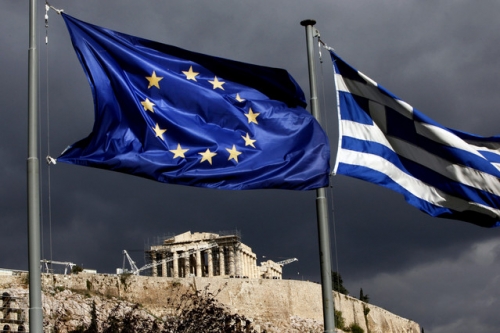 Italian historian Francesco Angelone has released a book dedicated to the Greek financial crisis.
The book, “La Troika sull’Acropoli” (The Troika over the Acropolis), was first presented in Rome.
Published by Bordeaux, “La Troika sull’Acropoli” discusses the last forty years of Greek history, with particular emphasis on the last few years. Angelone makes special reference to the outbreak of the financial crisis in 2009 and explains the course of events that have led to Greece’s dire present. Its final chapter concludes in May, when European Parliament elections took place.

According to Angelone, the Greek crisis raise a crucial question: Is Greece the victim of its own wrongdoings or is it the victim of an economic system that “strangles” weaker economies?

“The Greek crisis has received a European perspective. It reveals the limitations and the mistakes of the European Union, forcing it to review all its rules,” Angelone asserts.

During the presentation of Angelone’s book, Rigas Raftopoulos, a Greek-Italian researcher of contemporary Greek history, cited the social consequences of the crisis, emphasizing the responsibilities of the Troika with regards to its implemented policies and its wrong forecasts of what would follow the harsh cuts in the Greek health and education sectors.

At the Rome conference, Sergio Baltsavia, vice-president of Italian news broadcaster RAI, advocated a message of hope to the Greek people. Greece is a strong nation, he insisted. “They have survived the Turkish occupancy, by even conquering high ranking position in the Ottoman Empire government. There is no doubt that they will leave this crisis behind them,” he said.

Greek-Italian businessman Kostas Linardos expressed his own view of how Greece can survive the crisis. He said that there is a need to promote the comparative advantages of Greek products, in order to help them increase exports, by combining tradition and quality through a well-planned promotion plan.

The lockdown in Greece, imposed to stem the spread of the coronavirus, will gradually ease in two weeks, Greek PM Kyriakos Mitsotakis signaled on Monday.
Diaspora

Greece recorded a total of 1,269 new cases of the novel coronavirus on Sunday and 36 new deaths, according to the nation's authorities.