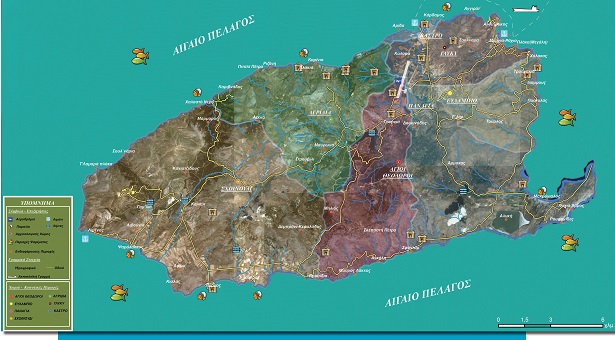 Ecumenical Patriarch Bartholomew, as a native of the island of Imbros, stressed the importance of the “Toponym Map of Imbros” in studying history as well as the local idiom. He further stated that the map would help on better approaching tradition and the cultural heritage of the island’s inhabitants.

The “Toponym Map of Imbros,” which was completed after a 10-year effort, includes all the island’s place-names (more than 2,400), as handed down from generation to generation.

This small atlas includes 36 maps was published by the Imbros and Tenedos Studies Association, with a donation by the Stavros Niarchos Foundation. The authors worked with patience, love and great care to gather the material. According to President Giorgos Xeinos, the atlas was created with the help of seven groups, from the island’s even villages, who searched for place-names through locals and in historical documents.

The atlas’ 144 pages include a map of place-names in Greek, as well as maps and charts per village and subregions. The reader can find the place they are looking for on the map and then turn to the 98 charts (written in Greek and in the local idiom) to find the area’s toponym.

“If our generation didn’t do this, then the younger generation wouldn’t be able to do it,” said Xeinos who was born in Imbros in 1944, adding that in a few years there won’t be people who can identify particular places. Furthermore, he believes that the maps will help preserve toponyms and they will be useful to people studying folklore, history, linguistics, nomenclature, as well as politicians, in order to support the assertion of the Greek minority’s requests in various European institutions.

The “Toponym Map of Imbros” is also available in digital form and the Imbros and Tenedos Studies Association is planning on making it available online.